Every sector in the world has several good players, but one would standout from each one of them. Take paintings, for instance. There have been the Picassos and the Van Goghs of the world; however, Leonardo da Vinci is the one whom generations will revere till God’s green earth exists.

Quite similar is the story of Warren Buffett, the single most influential man in the investment sector. If investing had been an art, Buffett would probably have been the best artist the world would ever see. The sheer influence he has on financial markets is insanely huge, so when he speaks, the world listens.

Buffett’s comments about any financial asset are enough to create a market trend for and against the particular asset. While this might be a great thing for those assets he praises, it’s certainly a worry for those which he doesn’t like. And one of those unfortunate ones is Bitcoin, the cryptocurrency dear to millions.

Warren Buffett has been a long-time critic of Bitcoins and has never held his words back while criticizing it. During an interview conducted in May last year, Buffet stated that Bitcoin was nothing but a “rat poison squared”. The year 2018 was already a disaster, and Buffett’s comments did not help either.

When asked about his views on Bitcoin and cryptocurrencies during the Berkshire Hathaway’s recently concluded annual meeting in Omaha, Buffett reiterated his stand, and again, did not hold his words back. He said,

It’s a gambling device … there has been a lot of fraud associated with it. There have been disappearances so much is lost on it. Bitcoin has not produced anything. It does not matter. It’s right there. It’s like a snail or something, and it’s not an investment for me.

Buffett also made a strange reference to Bitcoin, which made the world’s biggest cryptocurrency look even more stupid. Pointing at a button on his suit, he said,

While Buffett has a great influence on financial markets worldwide, the same cannot be said about the crypto space. Yes, the markets collapsed last year after his comments, but it wasn’t due to what Buffett said. The downward trend began in January 2018 itself, while Buffett’s comments came much later in May.

There are two reasons why the Master isn’t taken seriously, while somebody like Elon Musk is. First could be that Buffett represents a market which is absolutely vulnerable to the growth of cryptocurrencies. He holds shares is financial institutions like Bank of America, Goldman Sachs, American Express, Wells Fargo, etc.

Cryptocurrencies are expected to take over the current monetary systems in the future, which would be a huge loss for traditional financial institutions, and that won’t please the Master at all!

Secondly, giants like Elon Musk, who are as much influential as Warren Buffett out of the traditional financial markets, have strongly backed digital currencies. At a time when Musk is romancing with Dogecoin and Ethereum, Buffett’s “useless like my button” philosophy is the last thing crypto enthusiasts will succumb to.

So despite Buffett discarding Bitcoin, the market has been unmoved at least till now. Therefore, let’s say to Bitcoin, May the force be with you. 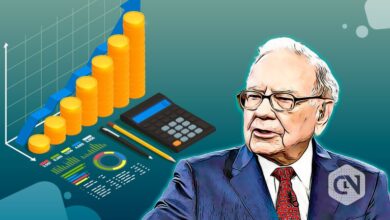