BTC was in the uptrend for a short duration and even broke through its immediate resistance at $40,000 and stayed above this psychological level for two days. But Chinese crackdown on mining companies has put a huge dent in BTC valuations. Even the hash rate for BTC mining fell by 18%.

First, China banned financial institutions from participating in crypto assets liquidation into real currency, and now it has been censoring crypto mining. The recent rise in crypto mining ban has created a negative sentiment in these cryptocurrencies, but the real danger is something else.

A CBDC, also known as Central Bank Digital Currency, is the biggest threat to BTC valuations and scaling. A digital form of a country’s fiat currency can be a threat to BTC. However, as compared to paper currencies, digital will be more secure. 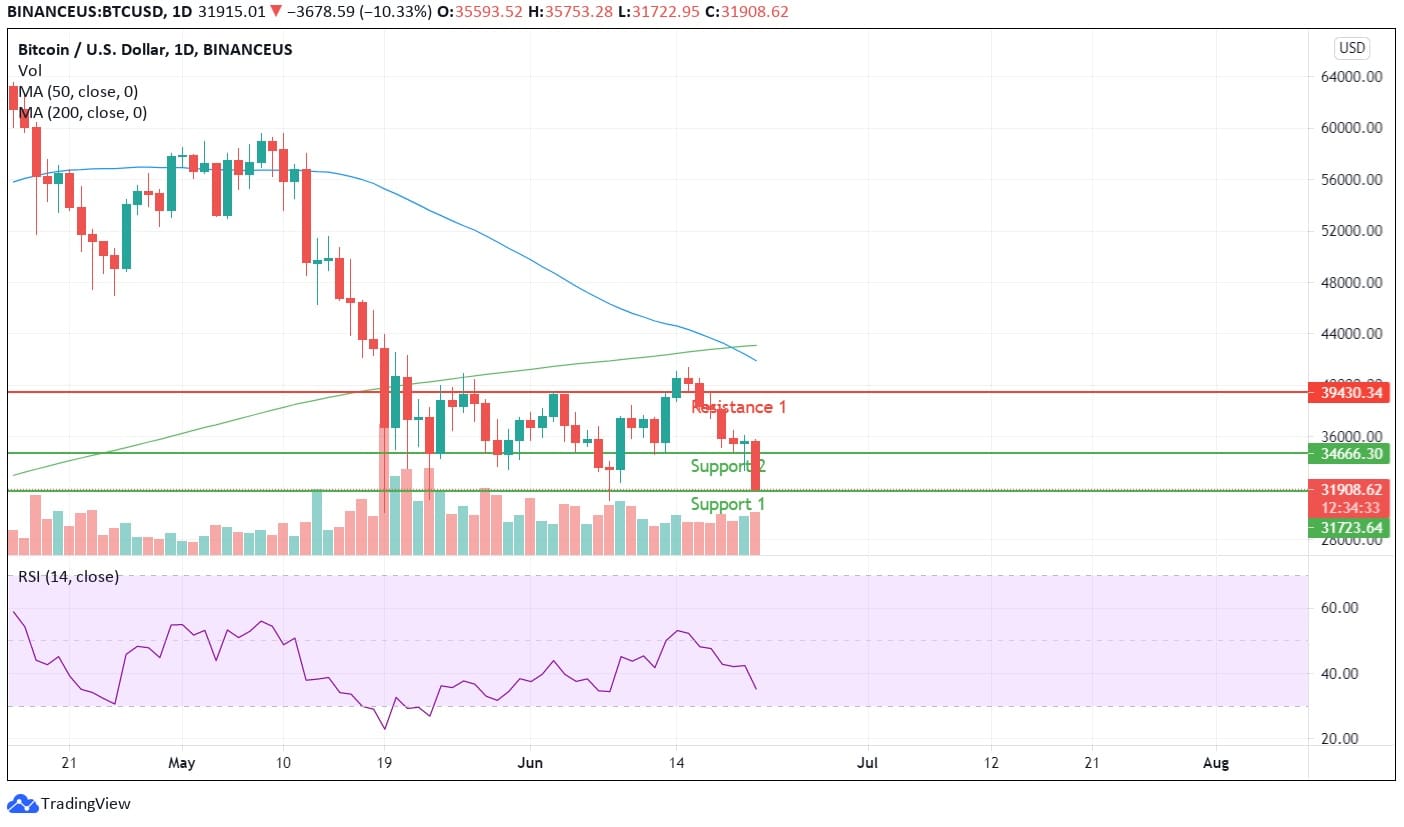 It is not limited to how further BTC can fall; while there has been a downtrend, a good indication is a rise in volumes. BTC has doubled in daily transaction volumes. The green and red candles are only an indication of trader action. The Chinese ban on mining companies can essentially turn into good news. Most of the mining companies in China rely on coal-powered energy, and this ban can essentially push such organizations towards utilizing greener self-dependent energy, something Elon Musk was indicating in a month.

Theoretically, there should be a bounce back from $31900 as it has acted as a long-term support level of BTC. The price action of the next few hours will be a clear indication of the strength and weakness of the BTC counter. Expecting a turnaround makes BTC a profitable buy at current valuations.

RSI on daily charts is indicating an oversold valuation, which creates a situation for optimum fresh buying and a perfect entry point for new holders. Currently, the RSI is placed at 36.61, and there should be a bounce back of some degree from these levels. 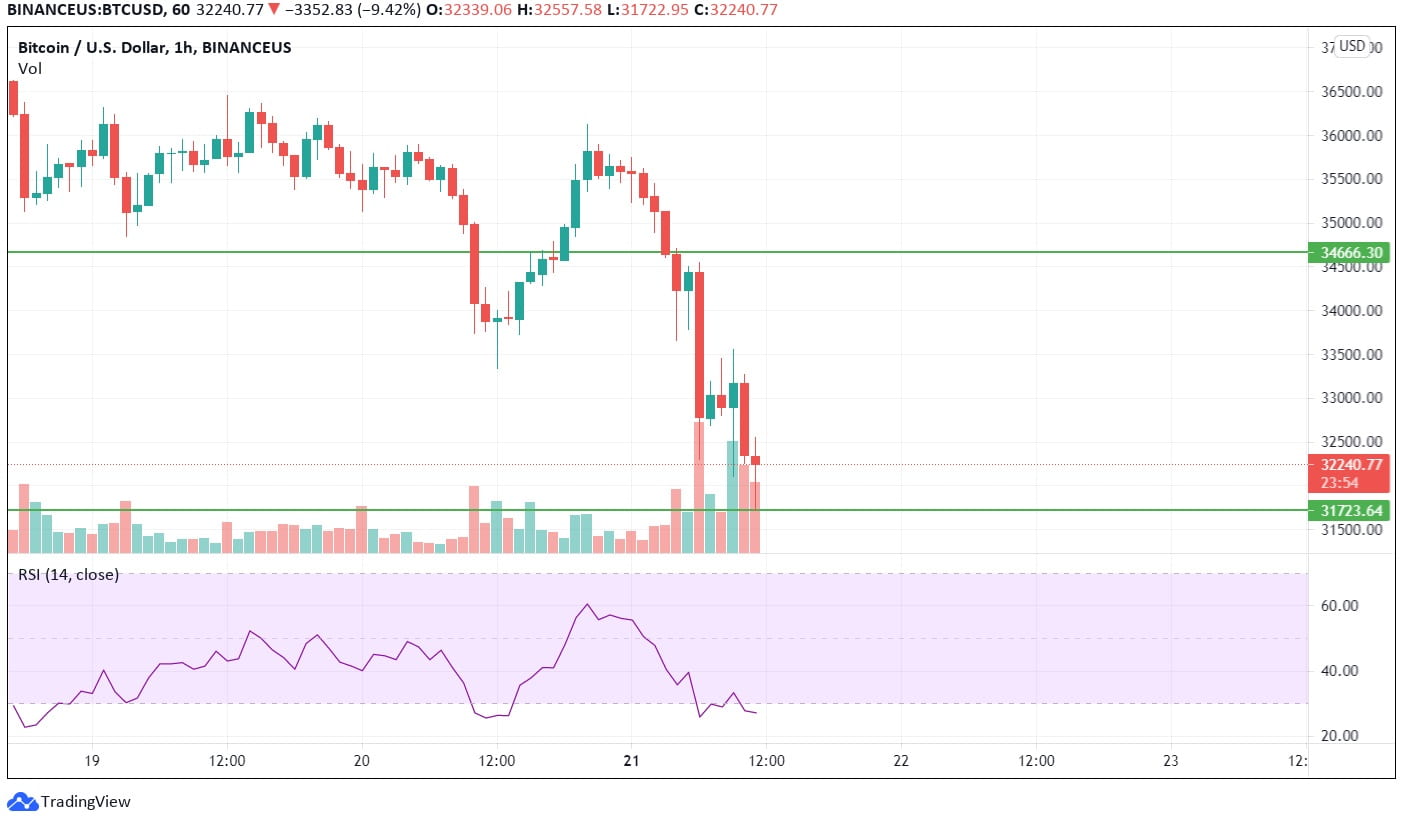 Within a small time difference of 10 minutes, BTC has jumped 300 points, affirming it is taking support from our second trend line. The respect of historical support and resistance lines indicates investor sentiment and confidence in the asset.

As for BTC, the RSI is headed in oversold zones which makes it a good buy at current valuations, and there should be no resistance in the bounce back to the $34500 levels.

$35000 has been acting as long-term secondary support. There would be some difficulty around $35000. Hence, short-term traders can make a decent 10-15% profits if they purchase at current valuations. On the contrary, if BTC breaks the second support level by a decisive downtrend, the price can tumble to $25000 levels. But, still if traders want to invest in Bitcoin, first they need to go through BTC price prediction and then decide the right time of investment. 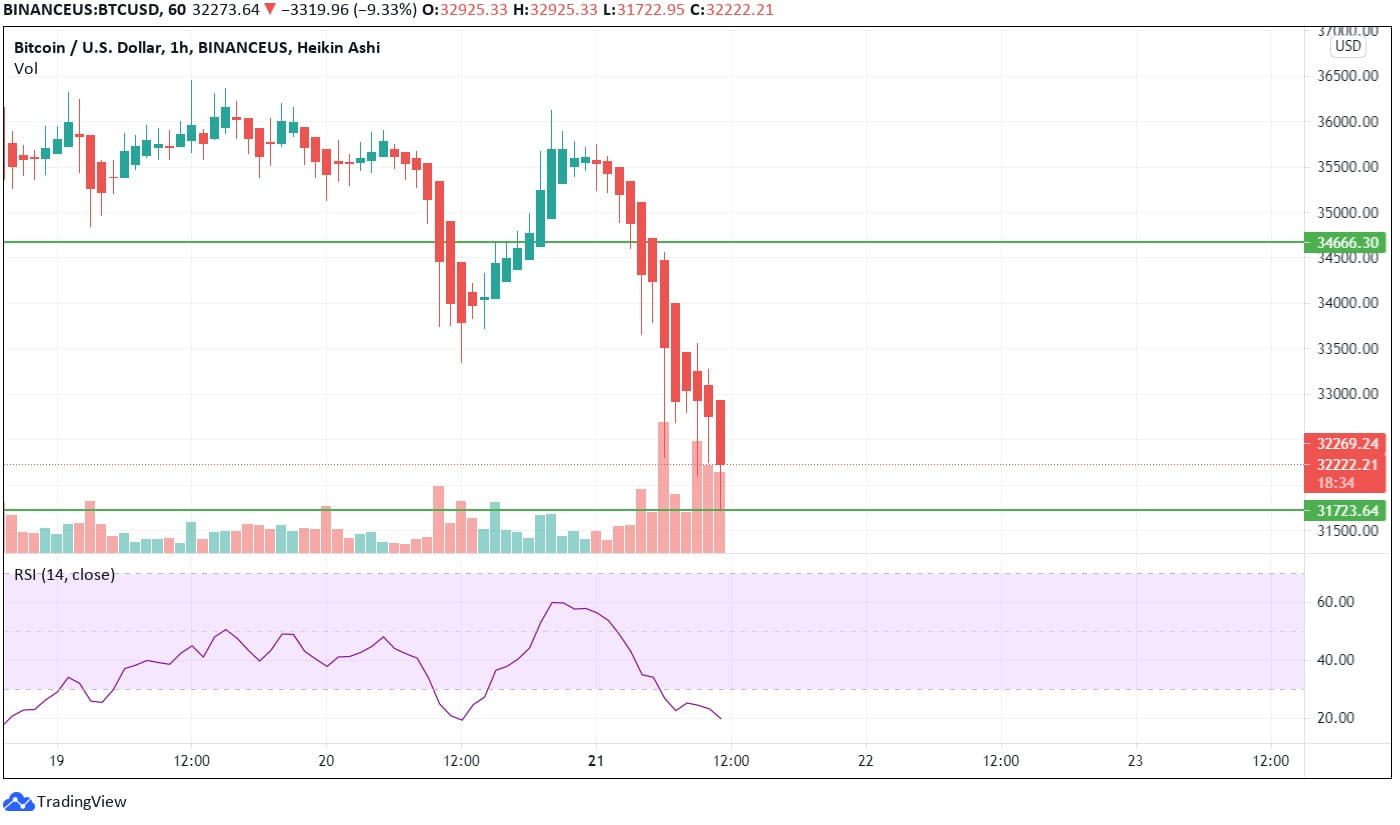 Bounce backs are a common aspect of frequent momentum changes, but Heiken Ashi only showed the trend when confirmation and strength are added to the asset. At current, until a strong green candle is formed without any lower wicks or shadow, traders shouldn’t make a buy position in BTC.

As it’s better to crosscheck everything available so that you don’t lack to gain profits in future.

Bitcoin’s Volatility Seems to Not End; Can BTC Rise to Its Glory?