Bitcoin is the most globally recognized cryptocurrency that was created in 2009. Bitcoin transactions are done with no middleman, and it is a completely decentralized platform. This digital currency is used to book hotels on Expedia, to buy furniture on Overstock and Xbox games. The reason why majority merchants use bitcoins as their payment is due to the fact that international payments are cheaper with bitcoins as these are not tied to any country or any regulation. Many people invest in bitcoins hoping that they will get higher returns once its value goes up. As the concept of cryptocurrency is getting into the limelight very slowly, it is expected that in future, the adaptability of bitcoins will be higher as it has got the greatest value among all the cryptocurrencies.

The number of bitcoins in limited though, but, it is expected that by the end of this year, there will be end of the bearish trend line and a significant bullish line can be noticeable in the bitcoin charts. 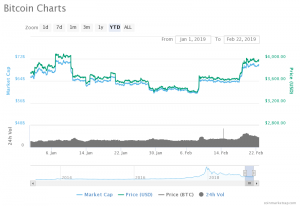 It is a fact that in the past few days bitcoin has been on a bearish trend line but, it is expected that it can be on a bullish trend line in its upcoming days.

According to the cryptoanalysts, the more the Bitcoins will be traded, the more there will be the propensity of this crypto to be on a higher trade line, and more will be its prices too. Moreover, bitcoins are scarce in circulation, and there are only 21 million bitcoins that can be mined. Out of these, 17 million bitcoins are in circulation, and 4 million are yet to be mined out. With a greater number of adaptability, bitcoin is expected to reach a peak of $20,000 by the mid of this year.  Already, countries like the US, South Korea, and Japan are extremely willing to splurge on this crypto, and they are also very interested in integrating this along with other digital currencies into their financial systems.

The crypto analysts also predicted that in 2020, bitcoin would definitely experience an upward shift and it can have the ability to create an upsurge with a value of $25,000 in the first quarter of 2020. By the end of 2020, Bitcoin can have a value worth of $33788.5 which is strikingly amazing and benefitting to the investors who are aiming to have remarkable higher returns from their bitcoin investments. And according to Bitcoin price forecast, In 5 years, the coin can be valued at $50044.6.

So, it is evident enough that Bitcoin is definitely one such digital currency which investors first think of when cryptocurrencies are concerned. With its greatest value, it can lure majority investors all around, and with its scarcity, it is expected that people will tend to owe more bitcoins. This indicates a positive breakthrough in its price hike in the upcoming days.

Bitcoin with its current resistance of 3,956.70 USD is set to travel higher by the mid of this year and with more on growing interests among the investors regarding this crypto, it is expected that Bitcoin will give higher returns to them in future.

Dogecoin Is Definitely Going To Be A Good Long Term Investment