XRP slips to the seventh spot as three stablecoins dominate the top 6 spots. Having declined 55% in the last year, even months’ movement has moved negatively. XRP has been a dominant force in applying its decentralized ledger technology, XRP ledger, for microtransactions, DeFi, and even NFT trades. The primary advantage of completing large transactions in the shortest intervals has become a winning bet for XRP as the cryptocurrency is now used to pay for such payments as transaction fees.

Deployed in the market in 2012, XRP supports major development languages such as JAVA, Python, and Javascript, allowing more flexibility to developers. With more than 150 validators on its ledger technology being operated by institutions, businesses, and exchanges, XRP has become a disruptive technology that rivals the speed and security offered by SWIFT payment systems.

Still, in December 2022, the bottleneck was created by the SEC lawsuit demanding XRP be treated as a security after sales of $1.2 billion worth of tokens since late 2020. It would be the second year without a clear outlook on the XRP lawsuit. Still, the underlying operations for XRP are running smoothly despite the support level trending value of the cryptocurrency.

XRP has faced recent rejections from much higher levels that led to a breach of 200 EMA, followed by 100 EMA. Returning to the peak value would require a higher buying volume and a demand spike. 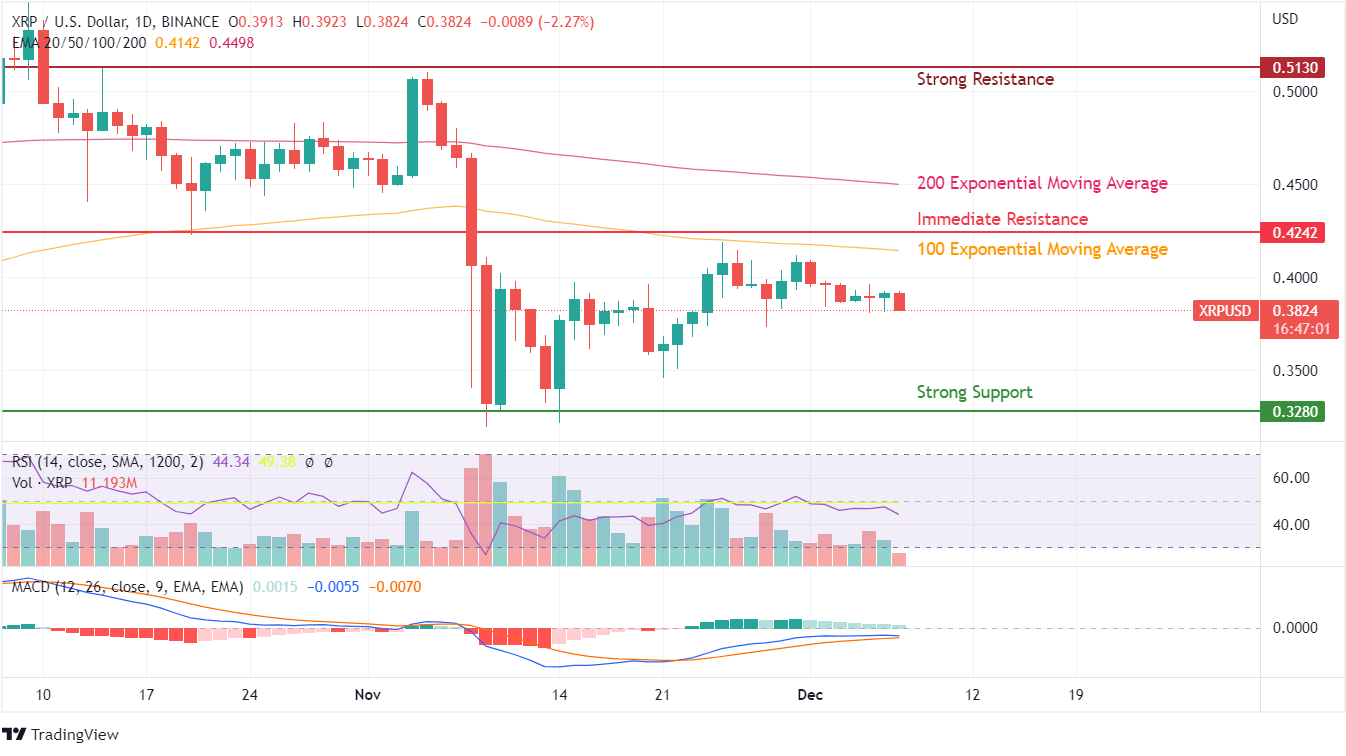 The decline from the resistance level of $0.51 became a turning point for XRP as the value tanked by close to 40% in less than five days. The sudden FTX fiasco turned the tables for trending tokens by creating a downtrend. While buyers have enthusiastically purchased XRP from the lows of $0.32, the rally ended at the 100 EMA curve. People are deploying buy-on-dip strategies but waiting for an overall improvement in crypto conditions before going all in.

Despite the mildly positive range of 20%, XRP is witnessing consistent buyer participation. Current resistance levels based on price action are active at $0.42, followed by $0.51. At the same time, RSI is showing a sudden decline as XRP has failed to trend in the last few days. It would create further selling pressure on buyers who purchased the token before the actual reversal at $0.32. If you are looking to invest in XRP for the long term, check out our projections to get more details on the outlook of XRP.

From the MACD indicator, it can be confirmed that a bearish crossover is underway. Hence the outlook for XRP is negative, and a bullish reaction can be expected only from a price action-based decline instead of a news-based disruption of the last negative run. On weekly charts, XRP has refrained from retesting the low of $0.2875 reached during the negative trend in May 2022. Moreover, XRP has marked the second consistent decline.