In December 2022, someone mentioning XRP immediately thinks about the update on its SEC lawsuit. While there have been some legal complications made aware to the public, the resulting movement for XRP shouldn’t be affected by the same.

XRP has been working as a decentralized ledger, but there are no blockchains to assure decentralization. It ultimately befalls the validators to make way for the token. The scalability and its ability to process 1500 transactions with applications in payments, tokenization, DeFi, and stablecoins.

XRP holds the 7th spot with a market capitalization of $17,300,409,438 despite losing tremendous value on a yearly basis. As of now, only 50% of the token has entered the markets, with a total supply capped at 100 million tokens.

In reality, XRP is a disruptive technology that can resolve the bottlenecks in the banking sector. Doing so could cause huge losses to multi-billion dollar firms processing payments in and around the major countries without using XRP. Indicating the SWIFT payment systems limitations, XRP has a huge market potential to grow.

XRP price action failed to maintain its movement within or upwards of the consolation. The resultant breakdown has brought the token back to its previous support level of $0.32, and the resultant volatility has kept the movement within a fixed price bracket. Click here to read more about how the XRP price is expected to perform in the coming years! 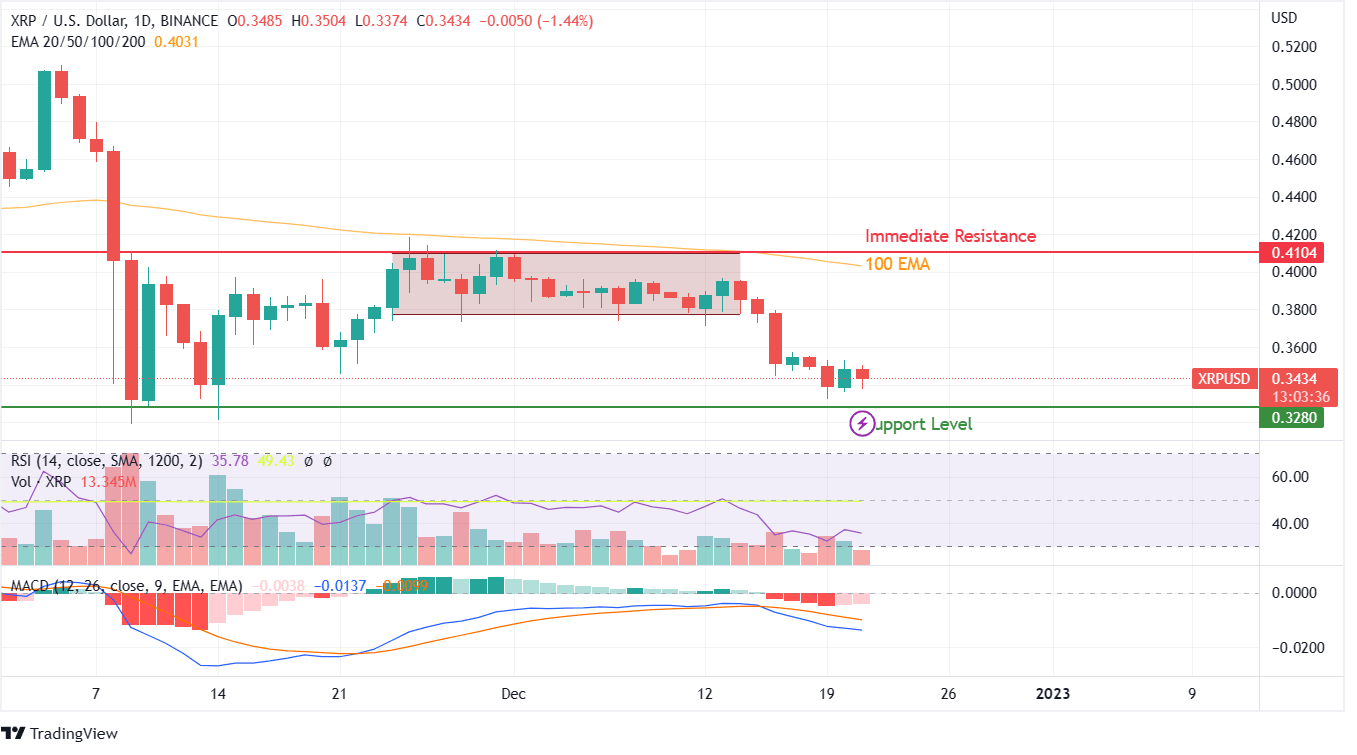 XRP price action resembles a sudden spike and decline. As the huge supply volume and low price of individual tokens create a huge volume for trading, a large chunk of this lot has been secured by whales. Their dumps and buying activities result in the creation of consolidation and breakdown.

A support level of $0.32 and resistance of $0.41 rocks the daily candlestick price action. The decline in buying volumes has pushed the RSI indicator close to oversold zones last witnessed during the first week of November. While the last reaction was to buy on dip with larger volumes, the doubt of testing a new low hinders probable buying activity on XRP.

MACD continues to move in a dark zone with a bearish crossover combined with support testing price action continuing to pose new challenges for a bull run. In reality, XRP price action has been testing the strength of $0.30 support since May 2022, and this would be the fourth attempt to overcome similar price action. The immediate resistance, even in the case of the aggressive bull run, would be witnessed near the $0.55 and $1 levels.

Bitcoin (BTC) continues consolidation in hopes of a breakout!

Binance joins the Chamber of Digital Commerce to regulate crypto