After the possible outcome over its lawsuit against US SEC, Ripple’s native token XRP is in high demand. The coin has zoomed almost 25% in the last 24 hours. Interestingly, the trading volume has jumped 160% over the previous 24 hours with around a $5.52 billion exchange. On a month-to-month basis, the token has jumped over 60% to hit a high of around $0.90.

The recent news has pushed the market cap to over $40 billion, making 6th spot above Solana and Cardano. The investigation from US SEC will conclude soon, and investors are waiting for a favorable result. US SEC alleged Ripple executives for an unregistered digital security offering using the XRP token. They have raised more than $1.3 billion through it. The transaction rate was increased by over $10 billion, which resulted in global demand for the token.

Instead of all these allegations, Ripple Labs continues to increase the customer base for its blockchain technology. Analysts are of the opinion that the next two years can be favorable for the XRP token. Should you invest in XRP? 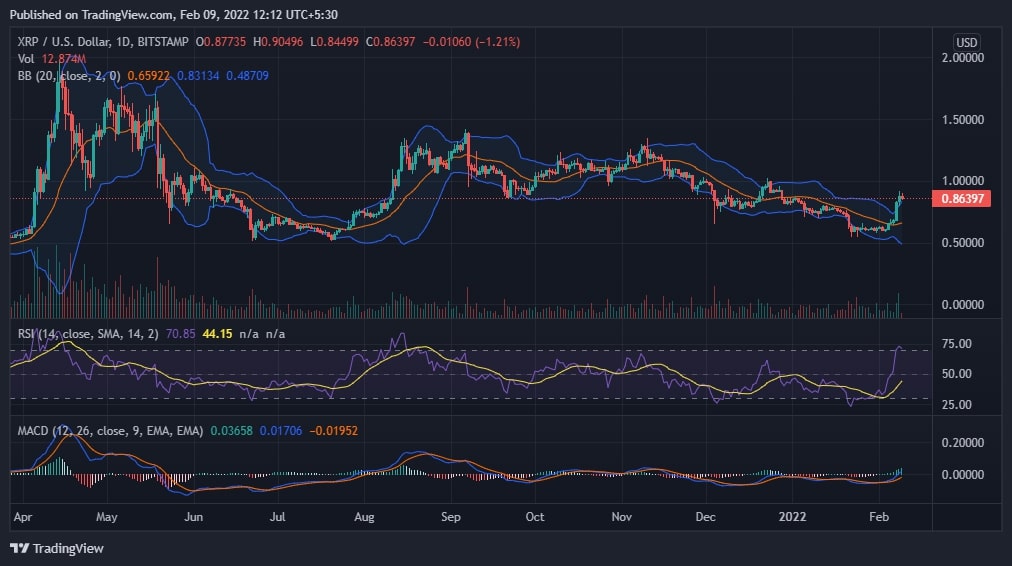 While writing, the price of XRP is around $0.086, and it broke the resistance level by around $0.77. Overall the price is very bullish, and the indicators also say the same story. On the daily chart, the MACD is bullish, and RSI is in the overbought zone around 70, suggesting bullishness in the market.

On the Bollinger Band, the candlesticks have broken the upper half of the band, which suggests a quick reversal, but the price will continue to move upward. Today’s candlestick is red, so it will come to the baseline of around $0.70, which is a good time to buy XRP.

If you think the result will favor XRP, you can invest in this token for a short-term gain. However, in the long run, the strength and use cases of the token will make the final call. To get more information about the future potential of XRP, you should refer to experts’ views and price projections. Ripple’s XRP has the potential to sustain itself in the long run.

We think XRP has a long way to go, and it is just the beginning. From here, the price will only move upward. The US SEC lawsuit case has restricted the price for the last few months. Investors are worried about the future of this token. Now, the situation is more favorable for Ripple Labs, and investors are optimistic about the token.

Dollar Is at Its Highest Against Yen While ECB Remains Hawkish