XRP, the Ripple Labs flagship child, now has faced a huge negative momentum. The ups and downs seen on XRP haven’t yet been mindboggling since the token had failed to create a new all-time high despite the bullish momentum seen on all cryptocurrencies.

XRP made its all-time high of $3.84 in January 2018 and failed miserably to trade under $0.30 in the next six months. The decline was mostly because of the crypto-wide negative trend, and it took XRP over three years to breach its immediate moving average levels and showcase a positive outlook.

XRP currently holds a market capitalization of $15,313,938,080, 48% of which is already in circulation supply. It is said to be capable of transforming the payments network we are witnessing today. As per these trends, XRP has huge potential, but with the SEC lawsuit of 2020 and the crypto bear cycle that emerged in November 2021, XRP has failed to live up to investors’ enthusiasm.

XRP token tanked significantly, with one major wick formed on June 14 and 15 price action. There is a lot of selling pressure, and sudden buying for a day or two wouldn’t be enough to tackle the negative sentiment. XRP will need a booster development in its business growth and SEC lawsuit outlook to initiate buying sentiment that can sustain the systematic profit booking in this bear market. 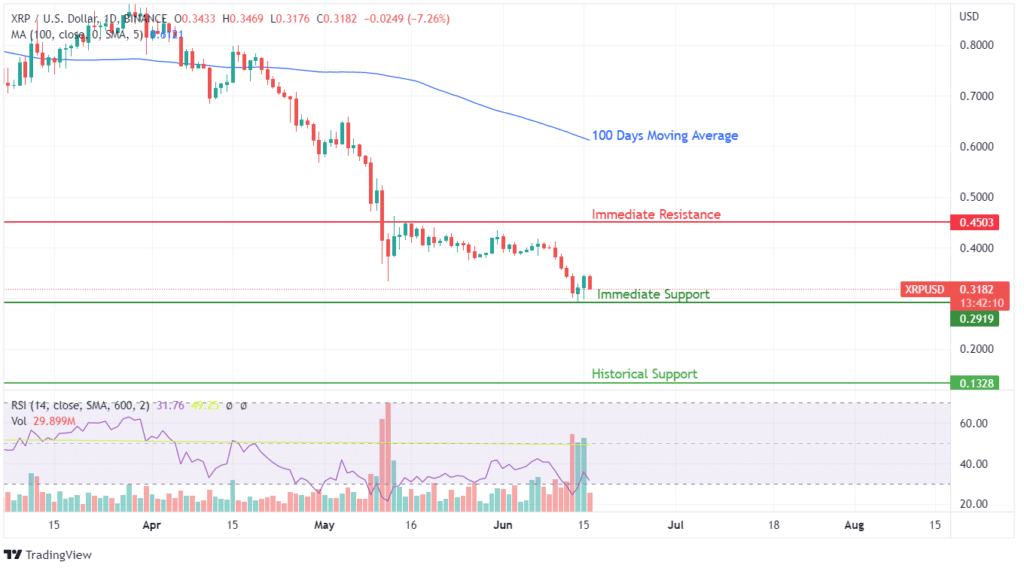 Looking at the price trend from a comparative perspective, XRP has historical support at the $0.1328 level, which would be impossible to retest. While the current support level of $0.2919 can be breached, it will bring a fresh round of buyers into action.

As seen over the last two or three days, a jump from fresh lows can take prices high, and in such cases, the buying-selling sentiment will continue to develop. For a safer investment decision and secure portfolio, know more about the future price projections of the XRP coin.

XRP will need a significant price momentum to overcome its short-term 100 days moving average curve, while the 200 DMA curve would take an even longer move. Since such a movement cannot be expected, it is safe to assume that the negative sentiment will stay until the 100 DMA curve comes under at least a 30% uptrend momentum.

Considering the RSI indicator to have taken a jump from oversold zones, the subsequent price trend justifies the jump. Volumes can be seen touching new highs, and buying sentiment dominating in the last two days.

The Sandbox Partners With Lionsgate for a New Action City