XRP is the seventh-largest cryptocurrency by market cap and is amongst the leading competitors for digital assets for real-time payments by financial institutions around the globe. XRP made strong gains in 2018, reaching highs of over $3.00 when it was suddenly hit with allegations of unlawful distribution and market-making from the SEC which had a disastrous impact on Ripple’s market value.

The lawsuit, which was initially strongly in favor of the market regulator, has now been affected by new evidence, and it seems that Ripple Labs Inc can, infact, have a winning leg to stand on. Technically, the cryptocurrency is currently in a deep consolidation phase after crashing recently from highs of approximately $1.96. Strong support was found near $0.51, which sent prices flying over two folds to trade close to $1.41 in September 2021. 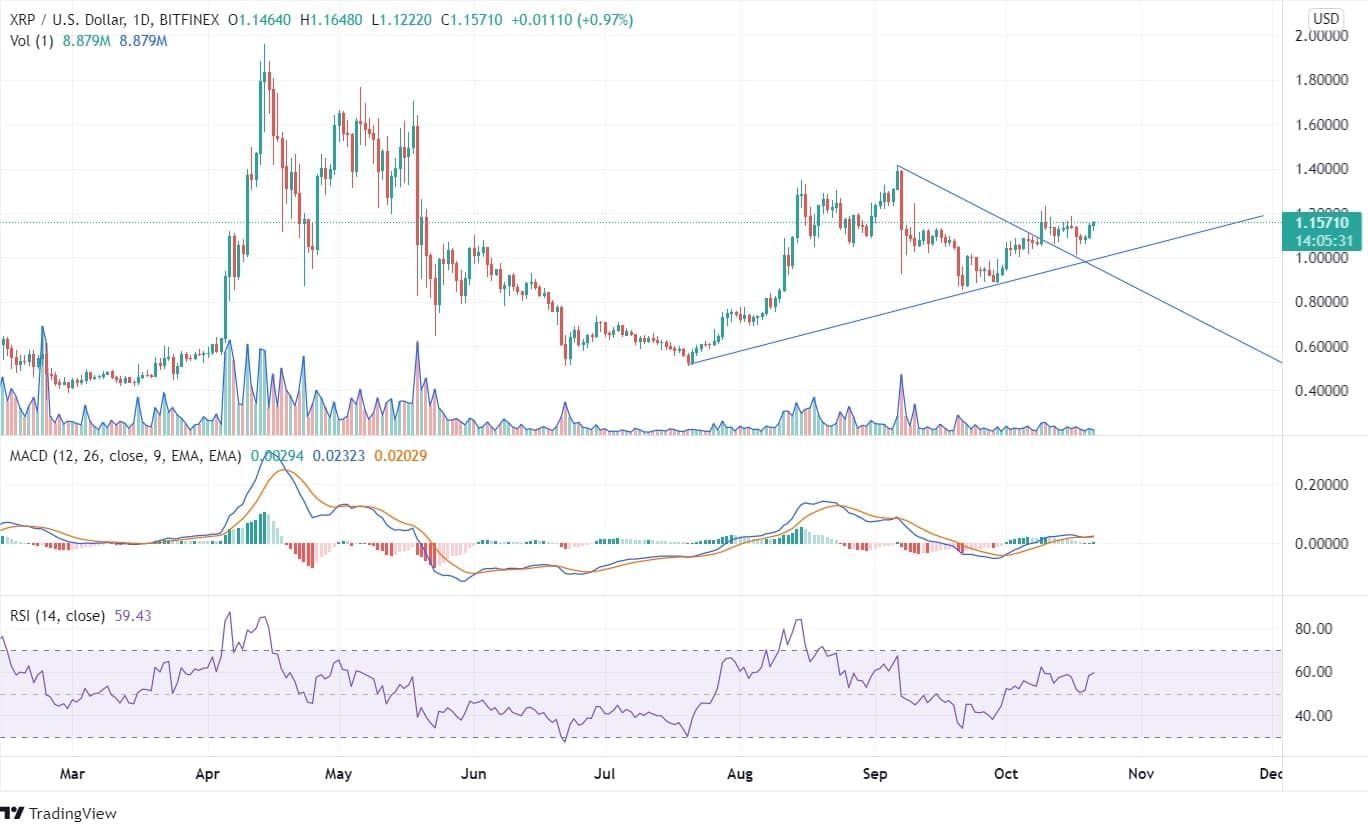 A consolidative triangle pattern can be observed on the weekly chart, with support coming in around $0.80 and resistance at recent swing highs of $1.41. A strong breakout with supporting volume on the counter may turn it into a good investment opportunity with targets of over $2.00 in the current and next year.

In April, XRP has been hugely profitable for its bullish investors. The price rose from lows of $0.45 to highs of $1.46. After January, the coin was constantly trading in a particular price range of $0.96 to $0.20; however, in April, the constant pressure of buyers took the price to its highs after a period of 3 years. The weekly chart shows that the XRP price is moving on the edges of the up-trending line coming over from July 19, 2021.

From September 07, the coin price started to fall from its highs of $1.39 to $0.86 and reached a sturdy support level. The price is within the triangle pattern, and at the major support zone moved in consolidated momentum, and the price got tested at the downtrend line.

Based on XRP price predictions, the price is expected to reach $1.41 if it crosses the recent high candle of $1.22 at the first level, and if the price crosses $1.41, the second expected target could be $1.64. The MACD indicator doesn’t show any clear movement. However, in the histogram chart, green candles appear, indicating a buy move.

There hasn’t been favorable bulls volume for a long period. However, the bears had immense support in volume on September 07, 2021. The volume indicates indecision between the bears and the bulls. The price is moving sideways, and bulls not being able to move the price higher is a matter of concern before entering the trade.

RSI being at 60, is indifferent and is heading towards its overbought zone. The expected stop loss can be $1.017 with a minimum take profit of $1.42.