XRP price has thoroughly enjoyed a bullish previous week while the current week is passing with a bit static approach. The price has stuck after it went up by 5.61%.

However, the way Ripple is spreading its wings in the core financial space while winning the trust of the authorities is something difficult to miss right now.

As we already know, XRP holds dual characteristics of a payment platform along with a digital currency. Recently, XRP has received approval from the Consumer Financial Protection Bureau of America for its use in cross-border money transfers.

This seems to be an apt time for this as the current global economic situation pushes so many of us to transact digitally. Now, when XRP can be used for cross-border transfers officially, chances are higher that people will get a leg up to get engaged with XRP as a payment option as well as an investment.

Ripple has strengthened its fundamental aspect with this, and this has reflected on its technical aspect too, but in a very subtle manner. The 2nd most prominent altcoin is in tandem with the ongoing slow market pace.

Since Bitcoin faced a rejection above $9800 for the second time, the market bulls have tamed the upside rally a bit. Due to this, XRP too seems stuck around $0.20.

As shown in the chart, the coin is consolidating after a rise of 5.16%. The coin has not seen any major loss of gains except for a few corrections. Also, it is holding bullish technicals for now. XRP price is above the 200-day EMA line and the MACD chart is in the positive zone too.

The one-year chart of XRP/USD shows how the currency remained largely bearish for the better part. The coin has started a recovery from its yearly low price point at $0.13 and is approaching the key resistance at $0.24 with a bullish bias.

XRP Loses its Position as the Third-largest Cryptocurrency 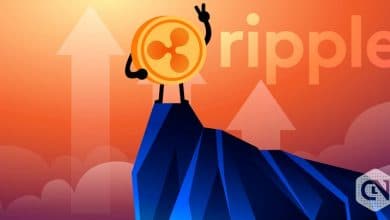 XRP Bulls Remain Above $0.22 Despite Corrections