With its unique capability of both transparent or being shielded for the highest level of secured transactions by zk-SNARK makes Zcash (ZEC) the preferred digital asset. Its partnership with JP Morgan in 2017 to develop stable altcoins under the Quorum project increased its popularity among both investors and traders. Many predict 500 and 5000 USD for the next few years for Zcash. It is because of its all-time high of 5,941 USD it reached in 2016. But only in 2019, it has risen from its year low of 45.85 USD to 81.94 dollars on 16 May.  It is 78.71% jump this year. Due to many positive factors, this upward trend of nearly doubling from its low has happened. It will be safe to predict it to reach its first level 298.56, which is its year high. It is more than 300% returns from the current price. 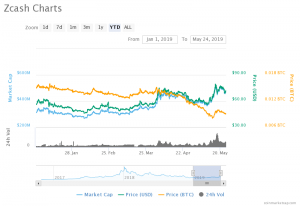 Continuing its uptrend, it is trading currently 0.38% above its yesterday’s close of 71.94 USD. It opened at 70.04 and slightly went down to as of today’s low of 69.91 during the first one hour of trading. From there it is increased to the current price, which is a two dollar jump so far. It is 2.9% rise as of now. The share is trading with steady volumes and with an increase in volume could cross its today’s high 72.44 reached at 7.14 UTC. If it crosses the high, it could continue its uptrend towards the 80 USD mark.

With the return of 2017 boom to selective cryptocurrencies in 2019, the uptrend of 36% within three days of Zcash indicates it is one of them. It is now in the correction mode of such a steep rise. It is time to accumulate at the current price or when it cuts 82 USD for huge profits up to 300 USD by 2019. However, check on ZEC Forecast to know what will happen to the Zcash price in upcoming years.

Bitcoin (BTC) Price Analysis: Bitcoin’s High Intra-day Fall is Nothing to Worry About