Cryptocurrencies were meant to address many issues relating to security, accessibility, and scalability, but one thing a lot of developers missed out on was privacy. The entire transaction history of a crypto token was easily identifiable, making it relatively easier for anyone to access the transactions a token was used for and trackback to the original owner.

In the 21st Century, Privacy is a real issue that needs to be addressed. Zcash came in 2016 featuring Bitcoin-like code but with an additional feature that allowed users to turn its privacy on and off.

ZEC relied on a zero-knowledge proof technology that allowed nodes on the network to verify transactions while protecting sensitive info about transaction history from the validator. While ZCash protected the user’s identity, it could be revealed in the case of regulatory compliance.

ZCash is valued at around $2,162,407,213, with a circulating supply of 67% of its maximum supply. It carries a circulation supply of 21 million tokens. Let us take a closer look at the price trend on Zcash concerning its price history.

ZCash price action over the last two years has been a single line of support, with multiple fresh highs being made till 2021. After hitting the all-time high, the prices have fallen to $300 and keep on retracing to double-digit support levels from each spike value.

Since hitting $270 in November 2021, ZCash is currently trading at $153 and has again started going down towards $85 support levels. Click here to know where the ZEC price is headed in the coming years. 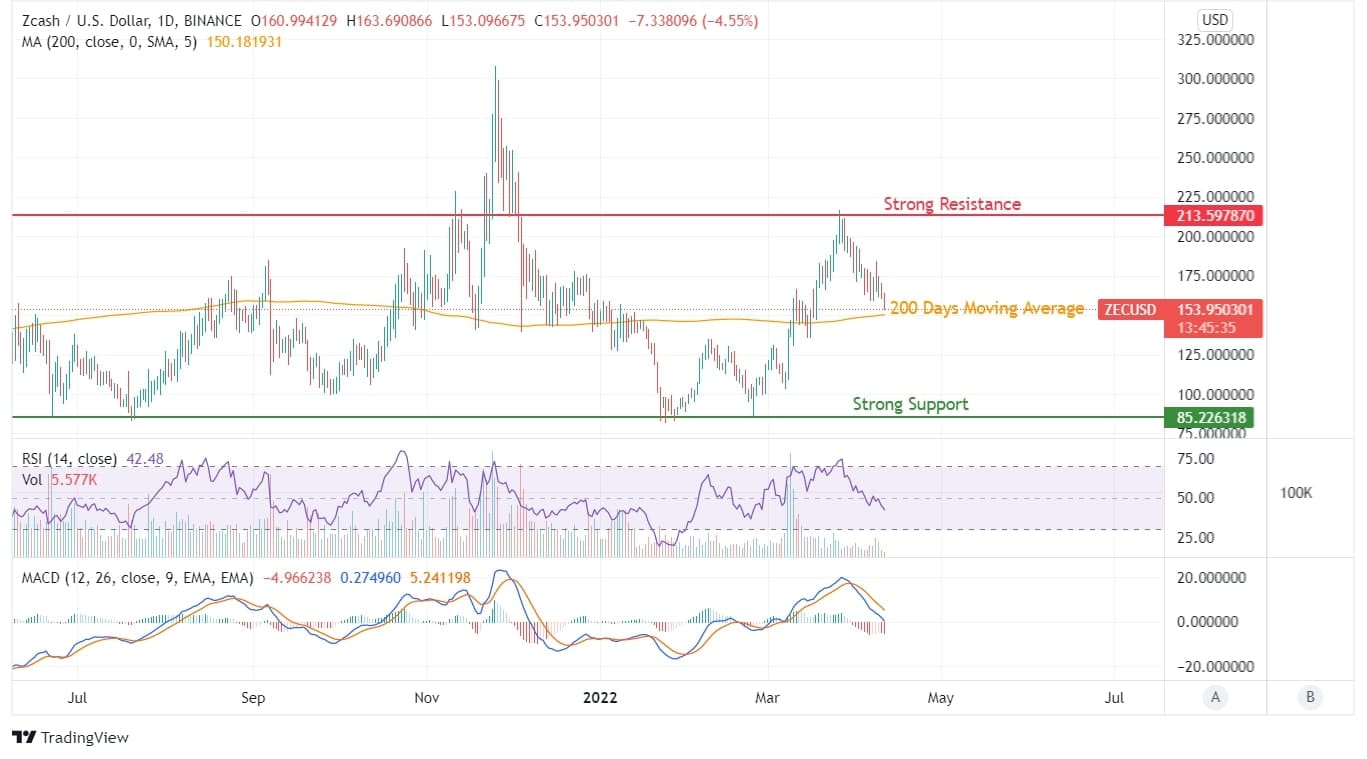 Zcash price trend indicates declining levels for profit booking. ZEC’s taking place a tad bit below the previous levels. This somehow indicates weakness and distrust among fellow buyers for the performance of the ZEC crypto token.

The recently seen price hike from $85 to $225 breached the significant resistance level of 200 DMA. Despite the current loss, as long as Zcash remains above 200 DMA, there will be a hope of retracement to recent highs.

In this small price action, RSI has slipped from overbought zones replacing the positive stance with negative with a level of 42. MACD Line, at the same time, went from positive crossover to negative crossover and close to the axis value. There is a minimal probability of the downtrend ending sooner, but failure to hold the 200 DMA curve can see a significant decline from current values.

The risk to reward ratio, considering its support and resistance level, the risk to reward ratio has reached closer to 1:1. The declining trend line creates a flat bottom pattern for ZCash, which can quickly turn negative if the support of $85 is broken under any scenario. Surpassing $200 should be a positive cue while breaching $85 is negative.

Bitcoin (BTC) Dips After Rejection From the 200 DMA Curve!