Zcash (ZEC) is an open source and decentralized cryptocurrency. It was created by Zooko Wilcox-O’Hearn in 2016. It is based on the Zerocoin protocol. This protocol gives complete anonymity and other privacy-related facilities to the users. On Zerocoin protocol, a feature called zk-SNARKs, helps the transactions to be fully transparent and anonymous. It maintains a secure ledger of balances, and it is not shared with any of the stakeholders. All the transaction data are encrypted on Metadata level. 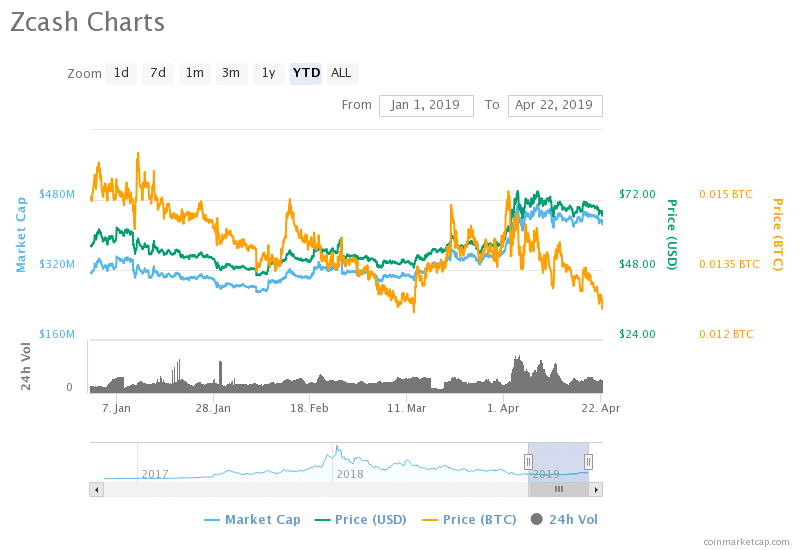 Zcash (ZEC) started the year 2019 with the value of around 57 USD to 60 USD. The coin’s variations in the price have made the investors be careful of the coin. It has shown much inconsistency over that last 100 days. However, the highest growth was achieved after 1st April market boom. It gained around 33% in just 4 days. But that momentum was lost within a week. The price variation started soon. The market cap on 22nd March was 345,960,609 USD. And the value of each coin in terms of USD and BTC was 56.29 USD and 0.01399051 BTC respectively. The current market cap is 23.6% more than the market cap of the past month. And the value in USD has increased by 19.31% in the last 30 days.

We predict the coin to be inconsistent in its valuation during the next quarter as well. The value may increase for some time. The resistance should be there at 75 USD. But the biggest gain is anticipated by the end of 2019. There is news about launching a hard fork of Zcash by the name Overwinter. This network upgradation will help the coin to gain value further. So, we predict the coin to reach as high as 200 USD by the end of 2019. 2020 prediction is also bullish.

Dash (DASH) Price Analysis: Dash’s Recent Boom Has Pushed it out of the Claws of Bear; Resistance at 130 USD