Zcash is a publicly encrypted blockchain that provides significantly improved privacy for its users compared to its counter cryptocurrencies. Zcash made a scientific breakthrough in cryptography with its use of Zero-knowledge cryptography known as zk-SNARKS. This framework works out advantageous for the users as it provides two addresses- one that secures the transaction end to end and the other that is transparent like the Bitcoin. This feature is customizable to the users, both the shielded and the transparent, letting the transaction either to be completely anonymous or publicly viewable. Zero-Knowledge Succinct Non-interactive Arguments of Knowledge known as zk-SNARKs are based on mathematical proof constructs, and it ensures all transaction details such as sender, receiver and amount are encrypted while preventing double spending.

Zcash has a market capitalization of USD 437,926,308, and each token can be purchased for 69.53 USD or 0.01381245 BTC on April 12 at 10:34 UTC. Based on the stats, ZEC is the 23rd largest cryptocurrency in the market and has a circulating supply of 6,298,306 ZEC coins. The 24-hour pricing movement indicates that $330,564,904 worth of XEM was trading. The return on investment is estimated by Coinmarketcap to be -98.38%. The negative percentile indicates the deterioration in current values from the earliest known price of the cryptocurrency. 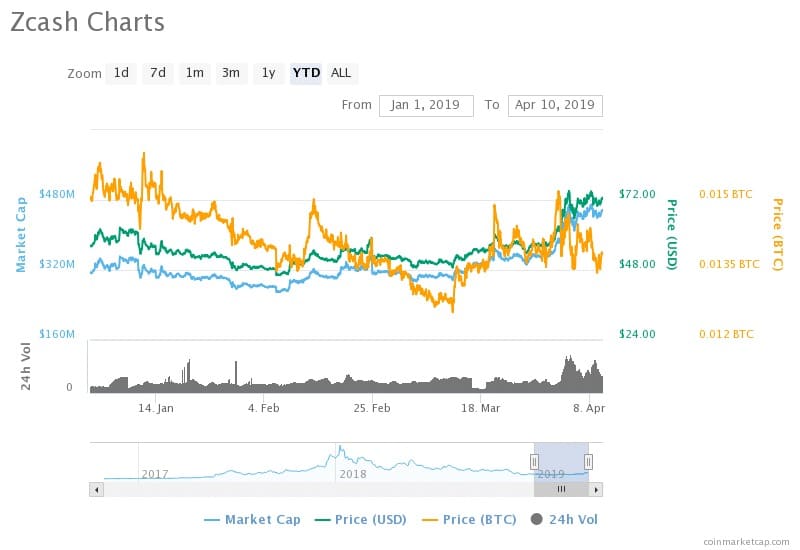 Zcash is a potential cryptocurrency whose price might grow in the upcoming years. The cryptoanalysts, based on the technical analysis, predict the price to increase to 380 USD by the end of 2019 and up to 867 USD by the end of 2020. Analysts believe that investors could substitute the traditional offshore banking services with Zcash in the future, that by looking at Our Zcash Price Prediction; the price might hike to 60,000 USD by 2025.

The present market depicts a favorable trend to the buyers. The overall market has been on the increase. Hence, current prospects for both long-term and short-term investments looks profitable.