Zcash (ZEC) is a decentralized and open-source privacy-focused cryptocurrency that was launched in 2016 by Zooko Wilcox-O’Hearn. It was based on the Zerocoin protocol which enables selective transparency of transactions. There is an added advantage with Zcash, as the transactions in it can either be transparent or shielded through a zero-knowledge proof called zk-SNARKs. As a result, this gives the users anonymity with a secure ledger of balances without disclosing the parties or amounts involved. However, there is another way for acknowledgment, where instead of publishing spend-authority and transaction values, the metadata of transaction is encrypted, and zk-SNARKs are used to prove the authenticity. 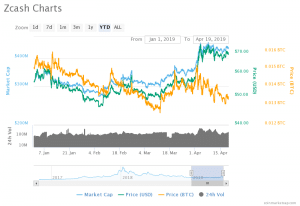 Let’s analyze the historical change in the value of Zcash (ZEC):

Amidst the rumor that Zcash (ZEC) will be listed in the New York-based Gemini exchange, gave significant support in increased its value. Nevertheless, the rumors stood out to be true & soon the crypto got listed on Gemini. Privacy is the core of Zcash (ZEC), and that is why the usage of it has increased significantly over time. Cameron and Tyler Winklevoss own the cryptocurrency exchange on which Zcash (ZEC) is listed. And a piece of good news for investors is that both of them are heavily invested in it. That is another factor for surety of investors that Zcash (ZEC) would surely get listed on the cryptocurrency exchange. The news of listing helped in strengthening the value of Zcash, and its value has jumped by almost 47% since then. There is speculation that the positive sentiment will rub off soon. If you look at the last 24-hour trading and fluctuations, it has been more or less flat. That is why even experts are not sure of its further movement. There is indeed some good news for Zcash (ZEC). Any further developments in future will propel its value to higher levels, benefiting the cryptocurrency for the longer term. At present, investors should wait for further correction level till investing in it.

Crypto Wallet SpendApp Adds Qtum; Token Will Now Be Available For Exchange With Other Cryptocurrencies On The Wallet