Zcash (ZEC) is an open source and decentralized cryptocurrency created by Zooko Wilcox-O’Hearn in 2016. It is based on the Zerocoin protocol. Its privacy features allow utmost transparency of selective transactions. The transactions made on the Zerocoin protocol have both the options of being fully transparent or anonymous through a zero-knowledge proof called zk-SNARKs. The Zcash network also maintains a secure ledger of balances, and it does not disclose anything to the stakeholders. Every transaction is encrypted on the Metadata level, and zk-SNARKs are credited with the responsibility to check authenticity. 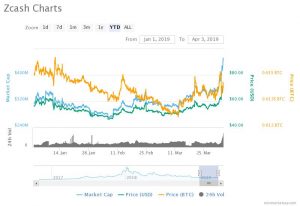 Just 45 days back the value of each coin was hovering at 50 USD to 55 USD, and no one might have thought it would touch as high as 70 USD in this short span. The past month’s growth has been inconsistent; it’s surely a worth coin to take a risk as experts have claimed that it is likely to touch 100 USD mark this quarter itself. That would be a 50 % growth over the current price. However, according to our Zcash Predictions by experts, we would suggest that the people who have been willing to purchase the coin, no time can be better than this while the price is still hovering around 69-70 USD. Long-term holders are going to reap a huge dividend as this coin is following the way of Bitcoin. Like Bitcoin, Zcash also is moving upwards abruptly. With some variant choppy price movements, Zcash (ZEC) will be deal of much profit.

Flippening On the Cards? Google Users in the US Show Greater Interest in XRP than BTC