Zilliqa, one of the top 100 cryptocurrencies of the global market, is seen gaining impetus as the digital asset market edges and the major crypto—Bitcoin trades above $19k. Having followed the same momentum, ZIL/USD currently trades at $0.0339. Alongside, the coin was seen trading sideways until the Bull Run that has been extended over the last week of the previous month.

Zilliqa is known for its speed of transactions on its blockchain, which otherwise are comparatively slower, leading to provide second-layer scaling solutions. With the current rise in momentum, the ZIL coin has hit a fresh YTD high at $0.036 and continues to trade in the higher price range against the greenback.

At the press time, Zilliqa was spotted at $0.0339 with an apparent inclination towards the higher range and a steep rise from the beginning of the previous month. The price trend of ZIL/USD is seen breaching the upper band as the positive sentiment prevails and currency retains support from 50-day and 200-day daily MAs at $0.0225 and $0.0198, respectively. The major support being $0.030, followed by $0.025 and $0.020 if it plummets amidst a volatile movement.

Related: Read our Zilliqa Forecast for the Next 5 Years

The Bollinger Bands are seen widening gradually, and a volatile breakout is, therefore, predicted before the end of the year. If the market retains the strengthening momentum, it is likely to retain the bullishness reflected on the MACD chart and the RSI lying at 64.74, with an apparent inclination towards the overbought zone as the demand amplifies led by price. One of the top 100 cryptocurrencies of the market, Zilliqa, has greater uniqueness and huts the right chord; the major resistance lies at $0.036 and $0.040.

Bitcoin Price Lingers Around $19.5k; Awaits a Crossover Above $20k 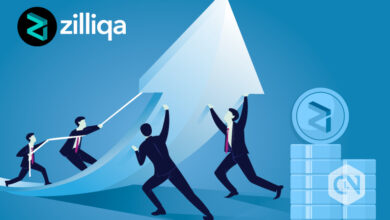 Zilliqa (ZIL) Is Set for a Huge Breakout 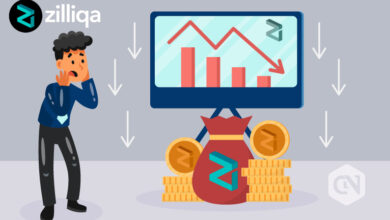