What is Injective Protocol?

Injective chain is an important part of Injective Protocol, and it is developed to support Ethereum consistent DeFi applications. The INJ chain is implemented as a Cosmos SDK module built with EVM on Tendermint called Ethermint. Injective’s ecosystem consists of Relayers, Blockchains, dApps, data, Exchanges, NFTs, Oracle, Stable coins, Validators, and Wallets. Apart from this, Injective’s incubator Burnt Finance is a fast and low transaction fees NFT trading platform, and it is the first decentralized NFT protocol on Solana.

Eric Chen founded the Injective Protocol in 2018, the co-founder and CEO of Injective labs. A group of developers and experienced engineers are working behind Injective labs to seamlessly create and execute decentralized financial systems and services. The private test net was released in 2019, and subsequently, the protocol evolved with the release of new facilities and services. To a large extent, the team has succeeded with the DeFi application and avoiding third-party intervention in cross-chain trades.

How Does Injective Protocol (INJ) Work?

The INJ chain includes a decentralized side chain relayer network which acts as a layer 2 derivatives platform, a decentralized order book, and a trade execution coordinator. Generalized derivatives platforms are developed using Injective’s future protocol and general smart contracts. The Injective’s future protocol allows traders to create, enter and, execute perpetual swap contracts. With a two-way Ethereum peg zone, ERC-20 and ETH tokens can be sent to the Injective chain and the EVM-compactible execution environment.

Injective API nodes are mainly used to provide transaction relay service as well, as they serve as a data layer. API nodes help direct uses with a Websocket API and HTTP to interact with the protocol. API nodes formulate appropriate transactions and then relay them to the Injective chain. API also provides abstractions for governance, voting, and staking. In addition to that, API nodes act as a data layer for clients, and the API is highly suited for an Injective fronted interface.

Metamask mobile app allows users to connect their wallets with Injective exchange. Together the project keeps its promises and missions for powering the future of finance.

Use Cases of INJ Token

Injective is the native token of Injective Protocol with a ticker symbol INJ. It is an ERC-20 token created with the OpenZeppelin contracts Ethereum package and is an upgradable ERC-20 token. Users can swap ERC-20 tokens for native INJ using Peggy bridge. Injective Protocol burns 60% of trading fees every two weeks; hence it executes a buyback and buys burn mechanism. Token burning reduces the supply over time and increases the demand. INJ has a maximum supply of 100,000,000.

The week was an easy start for the cryptocurrency market. However, most of the national stock exchanges traded red; digital coins markets are back in the green after a correction. The global crypto market cap stood at $2.203 trillion. Investors are worried that a successive increase can result in volatility any time soon. 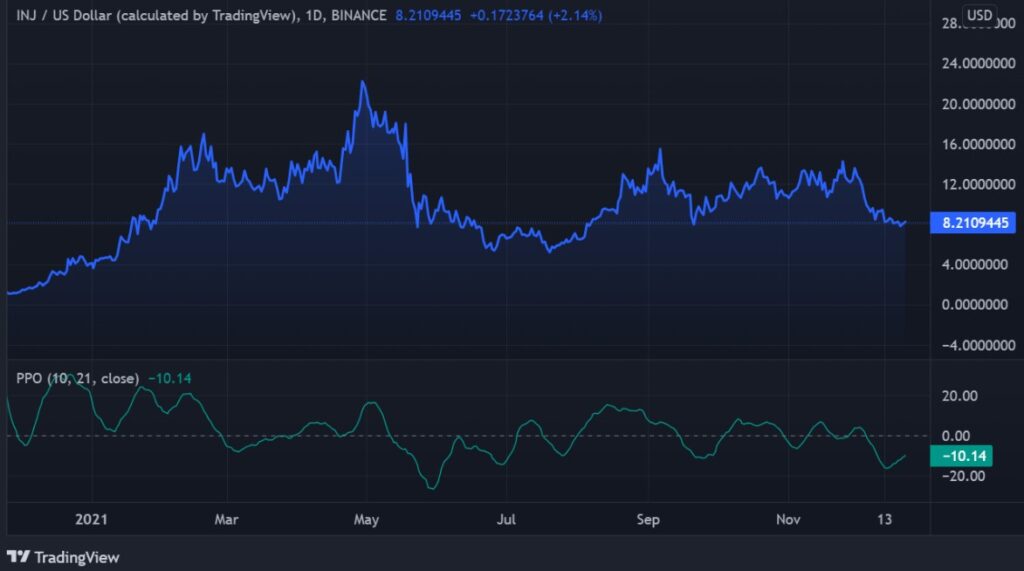 The price chart of Injective Protocol (INJ) exhibits huge market volatility, which is visible in the price oscillator chart. For every rise, there is a pullback; hence the coin has given good swing opportunities for traders. 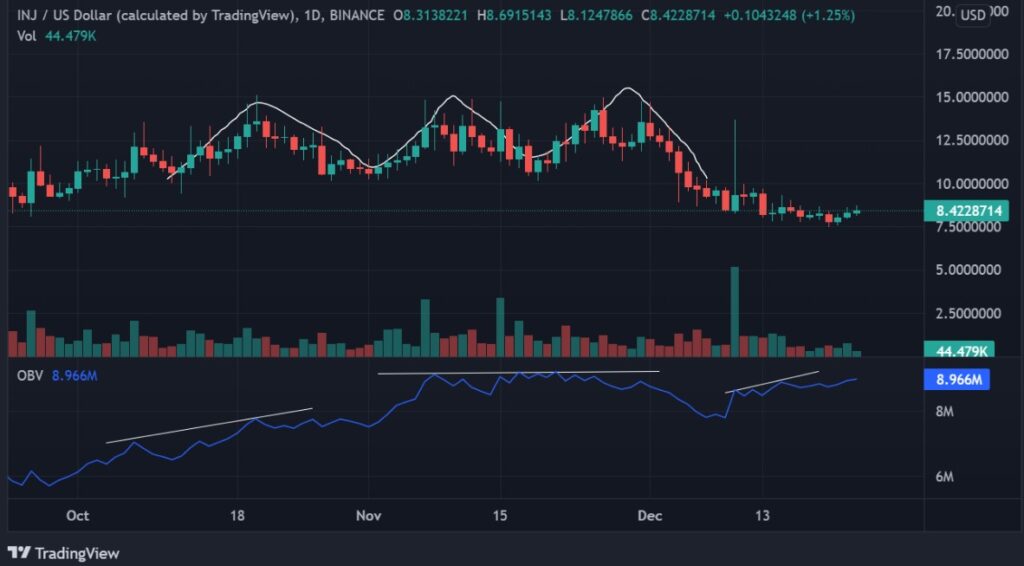 Technical analysis of the short-term charts, Injective Protocol (INJ) has formed a triple top bearish pattern and break down further. It has taken support at $10 three times and finally failed to bounce back. There was a short squeeze with a high volume indication on December 11, but the Injective Protocol (INJ) coin could not turn around at that level. The on-balance volume indicator supports the trend after a further fall of $1 in the chart. After a significant medium-term fall, INJ has started moving upwards. As of now, INJ has been trading in green. 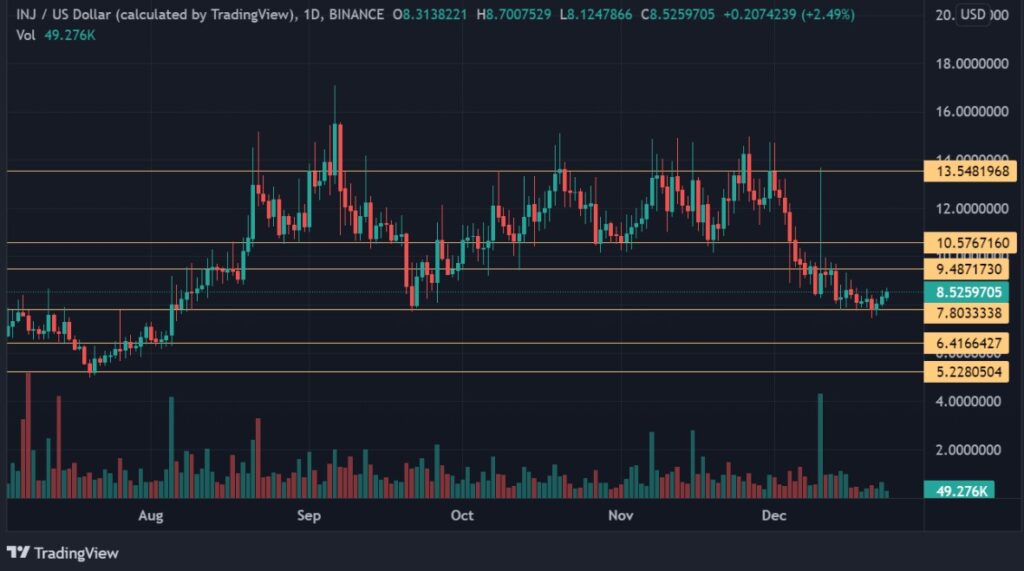 After looking at the resistance and support line, it is observed that the recent Injective Protocol price took support at $7.803 and slowly started moving up. If at all the Injective Protocol price fails to sustain the upward momentum, then immediate support is placed at $7.083. Any further skids can take INJ to $6.416 and subsequently to the major support of $5.228. Traders can sell Injective Protocol if it breaks down from the major support. On the other side, Injective faces the first resistance at $9.48. Above this level, INJ is eyeing towards $10.576, and major resistance is placed at $13.548. All the green candles formed for the past few trading session are short line candles; hence the upward movement is heavy. 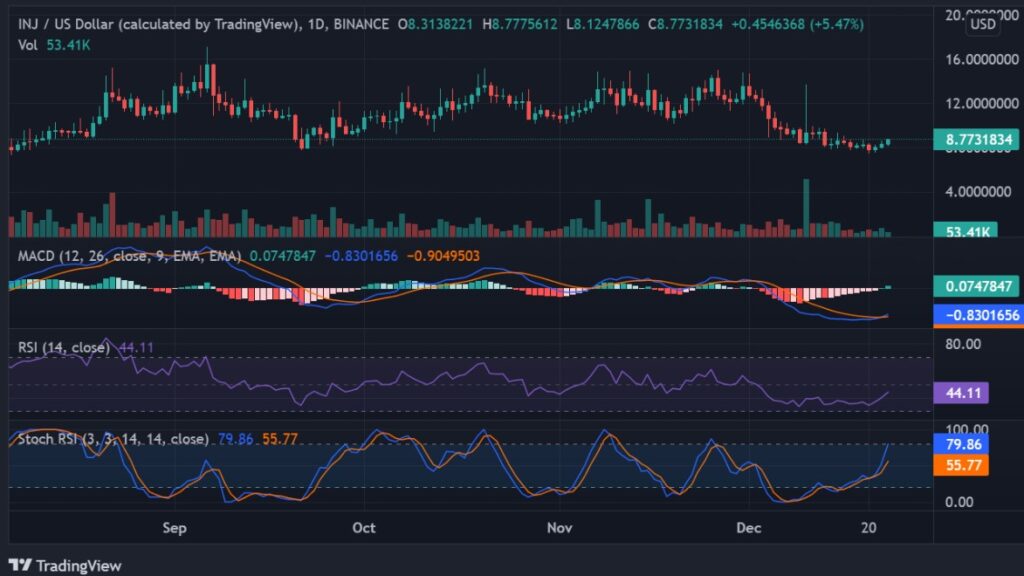 Laying eyes on some of the major technical indicators, MACD has started crossing the signal line from the down, which indicates the chance of an up move. RSI is rising to 44, and it just crossed the oversold zone. Stochastic RSI is looking for an up move and bolsters INJ. 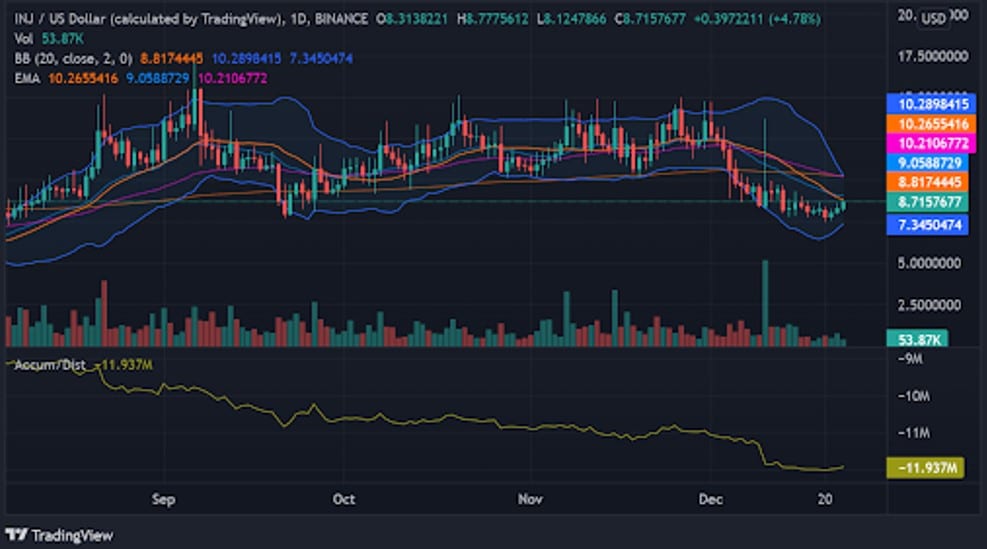 Most technical indicators confirm the trend that, after the toppling, candles are trying to settle above the middle line of the Bollinger band, which is a good sign. Due to the recent selling pressure, Injective Protocol fell below 20 DEMA, 50 DEMA, and 200 DEMA, but the candle of current trading sessions has touched the 20 DEMA. INJ is expected to cross 20 DEMA soon. After the descending move, the accumulation distribution indicator also slowly turned the direction.

In a nutshell, as per technical analysis, most of the major technical indicators are giving the signal for an up move, but still, there are headwinds. If the same momentum continues, INJ is expected to rise to $9, and bulls may soon seek an opportunity in Injective INJ. Now traders can look for a swing opportunity; still, value investors can wait for confirmation above the $10 level for a long-term investment opportunity.

As per our Injective Protocol price forecast, the price is expected to reach at least $35, and the maximum price might be around $45.39 at the end of the year. Based on the technical analysis and Injective Protocol forecast, both the short-term and long-term future of the coin looks bullish. Crypto enthusiasts can invest in INJ coin for a five-year time, taking a bit of proper investment advice.

Is Injective Protocol a good investment?

INJ price prediction based on algorithm shows it will be a good investment for the future, but the digital coin price always has huge volatility. This volatility of the market may necessarily reflect in the price of INJ. The above predictions are for informational purposes; it is always better to carry out your own research and take proper financial advice before investing.

Where to buy Injective Protocol?

What will Injective Protocol price prediction 2030 be?

Our Injective Protocol forecast suggests that the maximum price of INJ might be around $295.01, and it will give handsome returns to the investor. However, due to the high volatility of the crypto market, traders must invest only after doing their share of analysis.

Will Injective Protocol (INJ) price increase in the future?

Yes, definitely! The INJ price will increase and reach up to $13 at least by the end of 2022, and the value majorly depends on the market trend. But, the answer to how much will Injective Protocol price increase cannot be forecasted with 100% accuracy.