In essence, cryptocurrency is a completely decentralized currency mainly based on a blockchain algorithm. The blockchain network will confirm and verify all new entries into the ledger and any changes to it. Among the four leading cryptocurrencies, viz. Bitcoin, Ethereum, and Tether also feature NEAR Protocol as a predominant player.

Before we begin our NEAR Protocol price prediction, let’s check the overview of the coin!

What is NEAR Protocol?

The robust solutions offered by NEAR Protocol are the byproduct of the brains and toil of some of the leading tech and network experts who have lent their phenomenal contributions to these remarkable services. Created by developers Alex Skidanov and Illia Polosukhin, both of whom have extensive experience in programming.

NEAR Protocol’s native token is called NEAR and is used to pay transaction fees and storage. Eliminating siloed network unlocks the true potential of an entire ecosystem of novel payment gateways that are fast, secure, and low-cost. NEAR bespoke of a heritage and values which are founded on the framework of greater economic fairness and opportunity for all through research, education, and philanthropy.

Near Protocol is a public Proof-of-Stake (PoS) blockchain with a mindset to be user-friendly, incorporating features like human-readable account names as opposed to only cryptographic wallet addresses and the ability for new users to interact with dApps and smart contracts without requiring a wallet at all.

With an entirely different approach to scalability through sharding, NEAR Protocol has been a solution provider by processing, communicating, validating, and completing transactions to other nodes. A pivotal advantage of sharding has been to reduce the computational load by splitting or partitioning the network into shards (or fragments). This would, in turn, accelerate network capacity.

NEAR Technical and Fundamental Analysis

NEAR’s price has been in a significant down run, as its value fell from nearly $20 to a huge low of $3.0. For the token to improve its performance and be a top investment avenue, it needs to perform similarly to when it reached its all-time high.

What News May Impact NEAR Protocol (NEAR) Price in the Future?

The NEAR community is quite strong; however, NEAR Protocol’s price is impacted by various factors and news. The NEAR platform is still developing, and its functionality is not yet completely launched. Some news might have a short-term impact, while others may have a long-term. Other than the ecosystem’s development, general market sentiments and demand-supply impact the price of NEAR in the future. 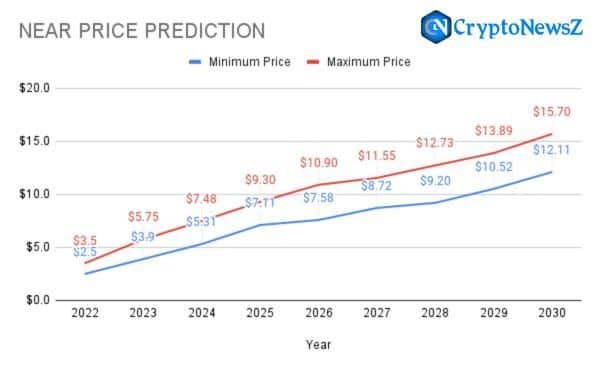 As per our NEAR Protocol price prediction, the minimum, average, and maximum trade values may be around $2.5, $3.0, and $3.5 in the crypto market. As per the analysis, we predict that the NEAR Protocol will be all set to face a bullish trend in the coming years.

According to our NEAR Protocol price prediction for 2023, the minimum and maximum prices are anticipated to be around $3.9 and $5.75, respectively. At the same time, the average price may be around $4.8. NEAR prices will start to recover from 2023.

The NEAR’s price is forecasted to have an average price of $6.4. As per the NEAR price prediction, the expected maximum price is $7.48, and the minimum price is $5.31. The value NEAR coin is expected to rise steadily based on its performance.

Our NEAR price predictions for this year show quite encouraging signs stating that the NEAR’S price might jump around $10.90 by 2026. While the minimum and average prices may be $7.58 and $9.2, respectively, in the market. Traders may have started betting on the NEAR’s price, tracking this token very closely for investing money.

According to the NEAR Protocol price predictions, it may hit the maximum price of $13.89 and the minimum price of around $10.52 for the year 2029. At the same time, the average value may be around $12.2. Significant growth is expected in NEAR’s price throughout the year.

With the high volatility involved, giving a crypto coin price prediction has always posed a challenge, even for the best of experts or the trader community. Some eminent experts have made the following Near price prediction for facilitating financial decisions by investors.

Slowly but steadily, $NEAR is growing!
Wax (waxnear)

Potential bearish retest here, worth monitoring. My macro target for Near is around $2.
aQua

Does NEAR have a future?

NEAR Protocol is one cryptocurrency that will have a bright future based on our NEAR Protocol’s price prediction. Riding the crypto wave, NEAR will rule the digital kingdom, so as a means of payment, it will have a long reign.

Is NEAR Protocol a good investment?

Yes! NEAR Protocol may be a good investment and make your money double. However, you must do your own research before making the buy or sell decision. Carry out your own NEAR protocol technical analysis and anticipate its future performance in the cryptocurrency market.

How much will NEAR Protocol be worth in 2030?

NEAR Protocol’s price may hit a maximum of $15.70 in 3030 and have a minimum price of around $12.11, based on our NEAR crypto price prediction 2030. The long-term performance of the NEAR Protocol is quite bullish and positive.

Will NEAR Protocol go up or down?

Based on our asset forecast, NEAR Protocol will definitely go up and achieve bigger milestones. As the market starts observing a huge invasion of projects, other cryptocurrencies may take a step back, and the NEAR price will reach the zenith.

Is NEAR Protocol a Scam or legit?

Despite all debates and controversies, NEAR Protocol reveals a healthy and active ecosystem. The NEAR network runs on a Proof-of-Stake (PoS) consensus mechanism; hence, it is a legit platform.