NuCypher is a cryptographic framework that provides a security and privacy layer for decentralized applications and public blockchain networks. NuCypher enables developers to store, share, and manage private data across multiple blockchains while permitting developers to sensitive information across several apps. NuCypher is an Ethereum based network that involves a decentralized key management system, encryption, and access control service that resolves the issues of storing and manipulating information. The industries such as banking and healthcare sectors that deal with a huge volume of details leverage the advantages of NuCypher privacy encryption systems.

The NuCypher network was co-founded by Michael Egorov and MacLane Wilkison in 2015. The two main technology services provided by NuCypher include Dynamic access control and Secret management. Dynamic access control conditionally grants and revokes access to sensitive data, whereas secret management system stores sensitive information such as passwords and private keys. This is achieved with the help of ‘Umbral’ and ‘Ursula.’ Former is the encryption scheme of NuCypher and later is a network of operating nodes.

Umbral helps to keep the data privately and share it without risking its security. Here the owners will provide decryption rights to the receivers with the help of proxy nodes. This proxy node is called URSULA, which performs the re-encryption for the recipients. URSULA does not have access to data, but they perform encryption by applying conditions. URSULA stake NU to proceed with network activities and get newly mined tokens.

How Does the NuCypher Network Work?

In the first stage: An owner can encrypt data with the public key and upload it to peer-to-peer distributed file systems such as IPFS, SWARM, or any other storage layer to store and share content across decentralized networks. Owners need to create and upload re-encryption keys to the NuCypher network to assign access to valid recipients.

In the second stage: Ursula accepts the re-encryption keys; in exchange for fees and block rewards, Ursula, a miner, will re-key data. Neither the storage layer nor Ursula has access to plain text.

In the third stage: The recipient passes an access request to the NuCypher network. If a valid re-encryption key exists, data will be re-keyed to the recipient’s public key, and the recipient is allowed to re-crypt it with the private key.

NuCypher was formed to resolve the issues of public-key encryption systems. Like the SSL/TLS in web applications, NyCypher is becoming an inevitable part of decentralized applications. NuCypher protocol mainly involves three important elements. Firstly, ‘Staker nodes’ in which NU can be locked in the ‘Staking Escrow’ for a duration. The locking of NU will generate two types of rewards, Inflation reward NU and Policy reward ETH. Secondly, the worker node called ‘Ursula’ helps hold cryptographic operations. Finally, Umbral proxy re-encryption, a key-encryption type, provides access control to distributed protocols. Together the network preserves information from attacks and spamming.

The NuCypher network has a NuCypherDAO. It is a multi-category public forum. The latest news and announcements from the team, submissions for protocol updates, research, and discussions will be available here. Outsiders such as developers can collaborate with the NuCypher team. New ideas can be discussed in the research and discussion category of NuCypher DAO.

What is Nu Cryptocurrency?

The native utility token of the NuCypher network is called NU, and it is an ERC-20 token on the Ethereum blockchain and stands to distribute trust in the system. The amount of trust in each node is directly proportional to the number of tokens locked up in the node.

NU was first sold in the simple agreement for the future token (SAFT ) after its first test net launch in October 2019. Information manifest 8% of the total token supply was purchased in the SAFT. Those who purchased NuCypher NU in SAFT had locked their token for two years, while NuCypher moved towards a full mainnet. After the mainnet launch, there was a supply of 1 Billion NU, in that 30% of token supply was entrusted to early investors and 8% for SAFT investors. In June 2021, it was listed with Binance.

The historical price chart of NuCypher is interesting. NuCypher soared significantly on October 15, 2021, on the occasion of the first anniversary of the coin. The merger news from the team bolstered the surge. The white paper of NuCypher was published in 2017, and the token started trading in 2020. After the NU price surge, the market valuation of the coin hiked more than 2 Billion USD, and it was the same period altcoin market cap touched around $2 Billion.

Furthermore, after this NuCypher price made a spike, the demand for NU coins in the cryptocurrency market increased. Investors are wondering about the reason behind the NuCypher cryptocurrency rush. The NU price action had happened on the same day when the coin was listed with UpBit, one of the famous cryptocurrency exchanges in Korea. 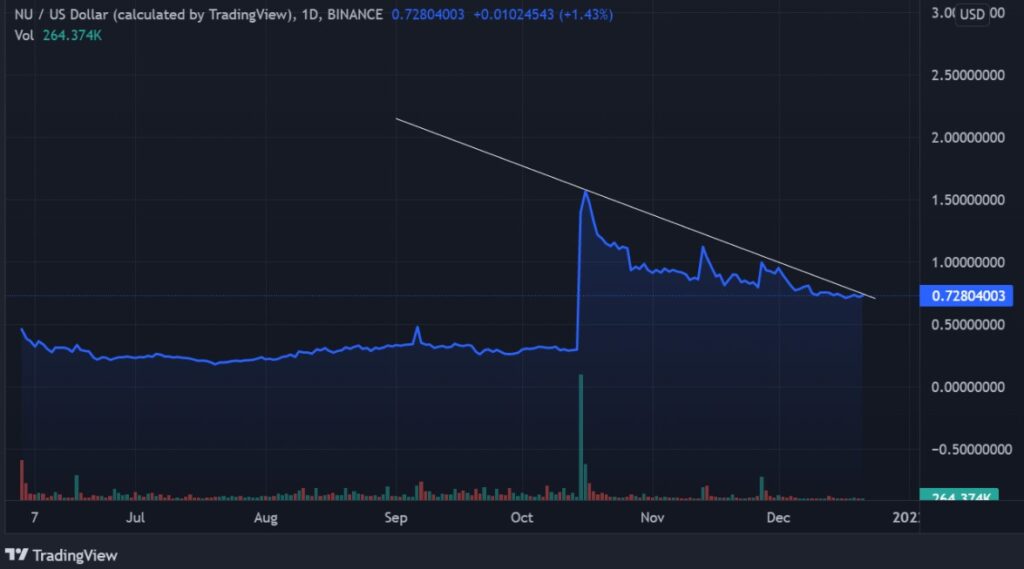 Technical analysis of NuCypher NU indicates that, after one year of sideways moves, NU has suddenly skyrocketed and was backed by huge volume in October. The candle’s opening price of NuCypher was $0.28135, and the closing price of NuCypher was $1.407. Even more, October was the month when the BTC and altcoin market was extra powerful, and the crypto market witnessed a huge market cap appreciation. Subsequently, many coins escalated to an all-time high. NuCypher NU price revealed a waning negative momentum on the daily chart by making higher lows. There is a descending pattern in the trend line, as shown in the charts. 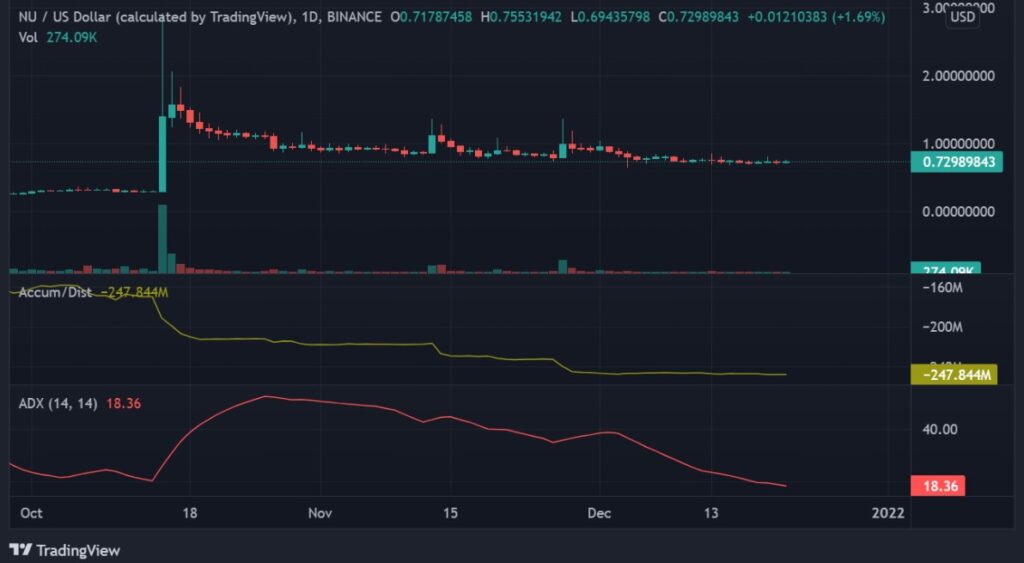 NuCypher price has remained driven by negative sentiments for the last two months, weakening the trend. Though investors have hope for the coin’s future, they haven’t started accumulating the token now due to the NU price sink. 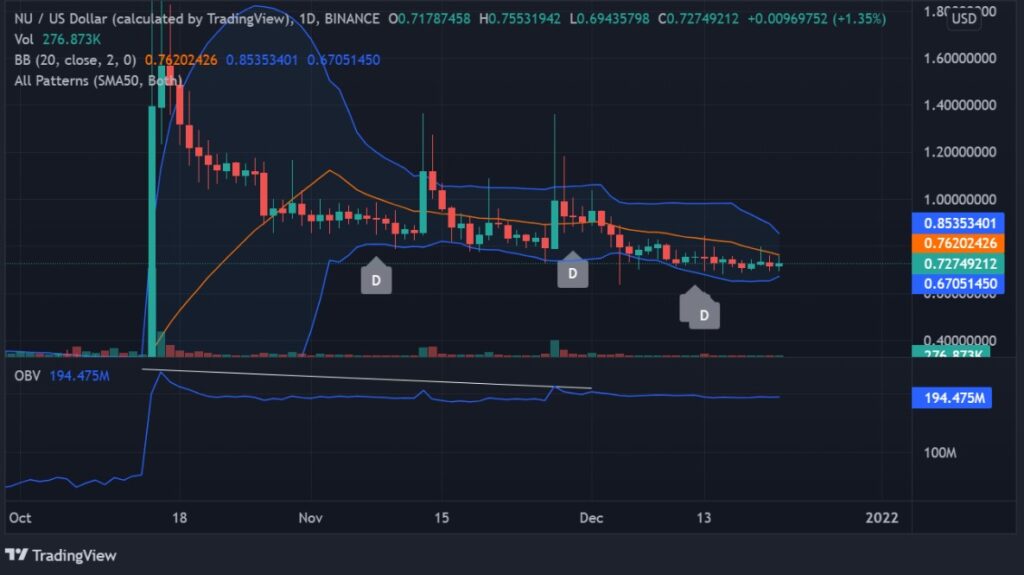 Technical analysis indicates NuCypher NU settled below the middle line of the Bollinger band, and the Bollinger band is squeezing. On Balance Volume indicator was in a downtrend; it has moved horizontally for the last week. The difference between the opening and closing NU price of the candle is very low and trading volume intimate in fact, swing traders are also losing interest in NuCypher NU. 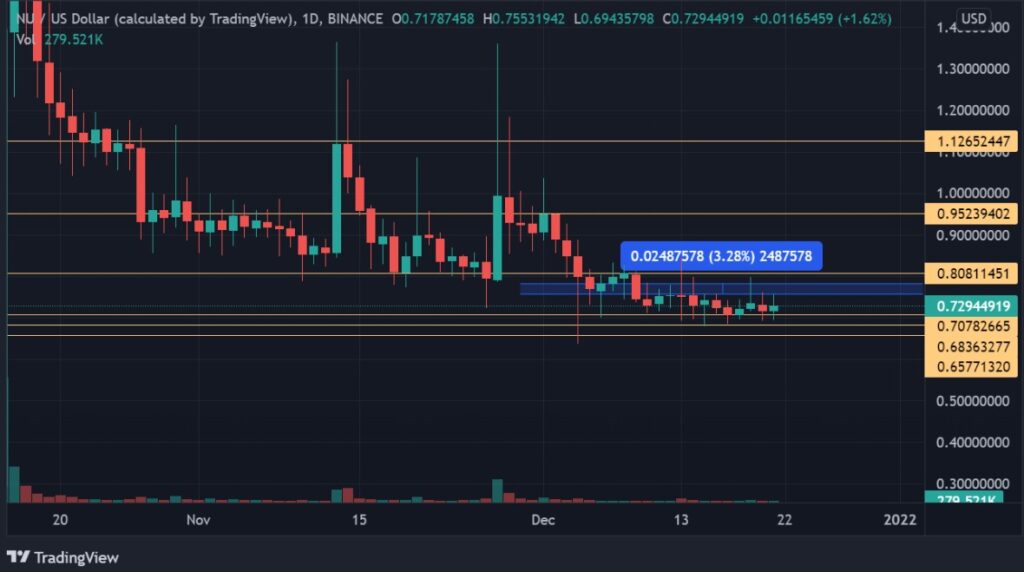 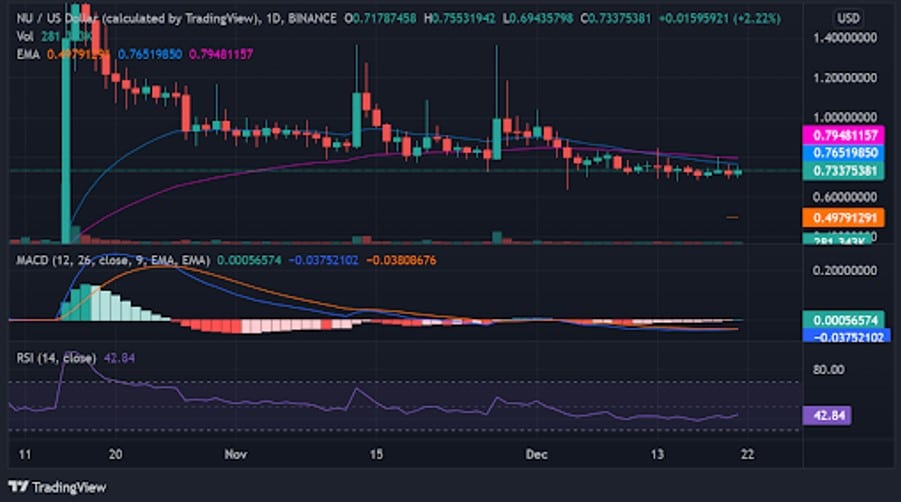 After analyzing the major technical indicators, MACD is trying to cross the signal line but has not confirmed any direction. RSI is 42, meaning NuCypher has just recovered from the oversold zone, and the selling pressure is reduced. Candles are trying to cross the 2o DEMA and float below 50 DEMA.

To put it briefly, the week is moreover a flat opening for many of the cryptocurrencies, and behemoths like BTC and ETH have been catching green for the last trading sessions of the current week after a down move. To sum up the technical analysis of NuCypher NU, considerable consternation still exists in the direction of the coin. Still, the strength of the bearish trend has come down, and most technical indicators are trying for a trend reversal. Selling pressure in NU has been reduced. Hopefully, there will be slow and sturdy upward momentum. Investors can wait for trend confirmation on either side from this neutral indication. Aggressive traders can look for a swing trade at the current level with a small stop loss and a small profit. A clear break out in trend is expected to confirm within a few more trading sessions.

In June, NuCypher announced its merger with ‘KEEP.’ Both are decentralized encryption communities, so they decided to couple the underlying protocol and move ahead with separate business plans. The merger is named ‘Keanu,’ and it has got a lot of social media attention. Anyway, investors are bullish on the future of this riskiest asset class. NuCypher created a huge positivity in the market last year, and the demand for the coin surged, especially from a long-term investment perspective. Experts say current negative sentiments and pullback are normal selling pressure after the upward trend, and it will recover soon. NuCypher, due to the fundamentals of the company and the use cases of the token, has a good long-term earning potential in the future as per the forecasts.

Developers are bullish over the company’s future growth, and the road map is all set to go. The project is looking ahead to more partnerships and expecting a bright and demandable future. When the project is set for the race, the native token will not be ignored. Looking at major prediction websites such as Wallet Investor and popular other forecasts, NU may reach back to $1 soon or within a year. It will give a good return to investors so that NU enthusiasts can invest on the dip.

Wallet Investor: As per our NuCypher forecast, a long-term increase in the value is anticipated. The price forecast for the year 2026 suggests the value might be around $3.208. Investing in NU virtual currencies might happen to be a great addition to your portfolio.

Price Prediction: In a 5-year forecast as per our analysis and predictions, the maximum price is expected to be $8.69 with a minimum trading value, and the average trading price to be approximately $7.14 and $7.35.

Gov Capital: According to Gov Capital, NuCypher has a lot of potential for making money. The price is not going to fall as per the forecasts. The maximum price is anticipated to be $19.048 in a 5-year forecast.

Tech News Leader: As per TNL’s NuCypher forecasts, the maximum price for 2022 will be $1.30 with an average price of $1.15. The short-term NuCypher price prediction looks bullish!

It was a profitable year for NU holders who brought the token to its entry stage. NuCypher is still in its early stages because it was launched in 2020. So far, the coin has given good returns to investors, and the future NuCypher forecast is bullish. As we saw in the technical analysis, if NuCypher can break the resistance level, the price will not fall as per the NuCypher price forecast.

Let’s find more details on NuCypher NU price prediction for the long term to know how the prices are moving every year.

NU coin price prediction is anticipated to begin at $0.742, and the price is hanging for the first two months, then NuCypher prediction is heading towards $0.821 by March 2022. NuCypher NU price prediction is foreseeing a price increase to $0.9 within the first half of the year, and eventually, the future price may cross a value of $1.149 by the end of 2022. Hence, the average price is predicted at $0.085.

Nucypher predictions are anticipated to open at $1.574 and continue the previous year’s trend. The year’s initial half may show a slow upward movement and is expected to cross $1.79 by the first half. Despite the short-term price fall, price predictions are surging towards $1.979 by 2024. If any unpredictable price actions happen in the future, then it will cross $2.00 in the same year.

NU crypto price prediction foretells a start at $1.985 and moves to $2.00 in the first month. It may cross $2.15 within the first half of the year. The maximum price predicted for 2025 is $2.407. Altogether NuCypher cryptocurrency is a profitable investment for the future.

Analyzing the future price of NuCypher for a five-year timeline reveals it has a long-term earning potential. Based on our NyCypher price forecast, the maximum value is expected to reach $3.5 by the year-end! Whereas the minimum value and average price for the year will be $2.43 and $3.13 respectively.

Is NuCypher a good investment for the long term?

Yes, NuCypher is a good investment as per our Nucypher forecast. Your investment will turn out to be a profitable investment in the long run. However, please note, unlike the money markets or other investment instruments, digital coins always experience huge volatility, so own research and investment advice are necessary before investing.

Where can I buy NuCypher?

NU is available in major crypto exchanges such as Binance, CoinBase, Huobi, OKEx, and Uniswap. You can use any of these exchanges to invest and make some money through virtual currencies.

What is NuCypher Price Prediction 2030?

Based on the NuCypher forecast, the crypto is going to grow! The maximum value may be around $12.21 with a minimum and average value of $10.47 and $11.51 respectively. The forecast suggests that holding the token for the long term may give positive returns.