The Overview of Presearch Ecosystem

Presearch is a blockchain technology-powered decentralized search engine for private search, better results, along with PRE token rewards for search. The main purpose and mission of the Presearch are to serve the community better with data and keep users’ trust. As per the website data compared to other search engines such as Google, Presearch claims an additional data layer to provide better results. It neither store your search history nor mentions the user name on queries.

Presearch team ensuring the success and reach for advertisement. As the project evolves further development, the site gives rewards and offers for search and sharing. It helps the marketers and advertisers; they can stake their PRE to a keyword. Ensuring privacy building on PRE website make them unique.

How Does Presearch Work?

PRE tokens are the native currency of Presearch. The website gives a reward for search; for example, when the user can get a maximum of 3 PRE worth a rate of 0.1 PRE in a day, node operators are rewarded for their contribution to the network. They can stake PRE token that offers server capacity on the Presearch network.

Nodes can be installed on computers that support docker. It has a pre keyword staking platform, a marketplace for keyword stakers, node stakers, project supporters to buy PRE. Users can buy, sell digital coins with the safety of the Ethereum blockchain. Anyone with a presearch account can create a node.

Fundamentals and Roadmap of Presearch

Presearch was founded by Colin Pape, who is the founder and CEO of shopcity.com; the main team includes 11 members. Presearch was first launched in closed beta in November 2017. In the initial stage, 15000 members are joined, and around 9 million searches happened. The company has built a sustainable business model aiming for decentralized search. The final phase is decentralizing governance by establishing DAO.

It is a highly competitive area of search engines where nobody can compete with Google. Still, Presearch is highly indicative and implements every step with almost quality service to its users. In 2018, they came up with open beta mode, which is a system where users can sign up, and it is easier to get started with Presearch. The introduction of beta is considered one of the major milestones in Presearch history.

People are looking for platforms with more precise search results and choices; Presearch used this hungry to increase the reach. Presearch uses a proof of work consensus mechanism which needs minors to mine new ether; it has a node registry that manages nodes. All these characteristics features make research grow in the cryptocurrency market.

In 2021, the number of Presearch nodes has increased from 10000 to 30000. As of the latest data, Presearch has 2.39 million registered users with 1.7 million daily queries. Presearch PRE is progressing towards mainnet launch. Mainnet is an independent blockchain running on its own network with its technology. Presearch has announced a partnership with CoinMarketCap for better growth in the crypto market.

First and foremost are the reward tokens it gives to users. People get tokens in the following actions:

Reward verification system ensures safety by detecting fraudulent activity and blocking them. PRE tokens are provided to those who do value searches with Presearch. Marketing opportunities and privacy safety, ease of use of the decentralized search engine make the system accomplish the aim of user-friendliness.

The marketplace is used to purchase PRE cryptocurrency. Bitcoin, Ethereum, or USD through wire transfer can be used to purchase PRE Token. PRE coins are standard ERC20 blockchain tokens. The total supply of PRE is allocated for keyword ads, nodes, supply, and circulation. 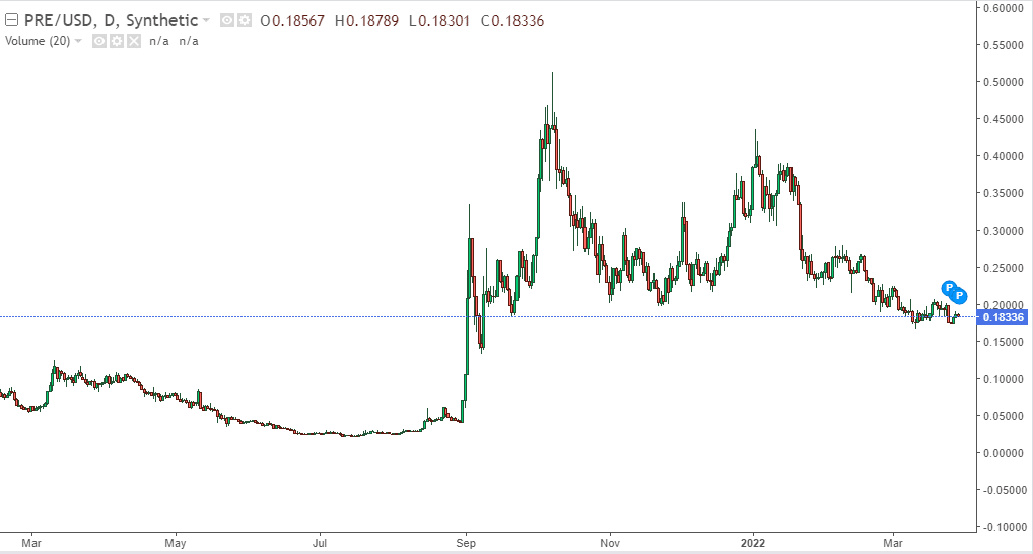 Historical data on the daily chart for Presearch cryptocurrency shows that after the price increase, Presearch PRE price was moving on a sideways trend with an average price of around $0.245; there was no PRE price change has been seen till August 31, 2021. The PRE price was hanging for a long period of time without initiating any trend. Finally, when the latest news about Preserach new developments was out, the PRE price gained momentum and started to shoot up to new higher highs retracing the bullish levels. A massive growth was seen in the month of October 2021 but there a downfall in November 2021. While again there was price rise from December 2021 to January 2022 which fell down in February. There was a slight recovery observed in mid February 2022 but did not remain consistent and reduced in March 2022. Currently, it is seen that there is a minor price rise which may lead to positive trend. 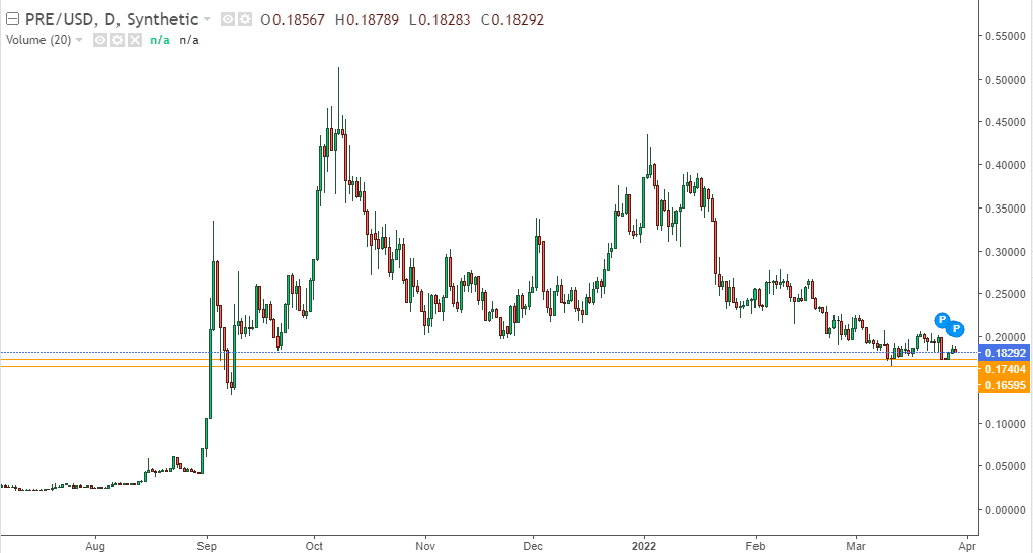 On the same date, the cryptocurrency market favored Presearch, and a bullish marubozu candlestick pattern has formed, which indicates a buy signal. Presearch was bullish for the subsequent trading sessions; the uptrend has continued till the level of $0.3492. A pullback happened due to the high volatility in the initial week of September 2021. As per the latest chart, the immediate support level is $0.174 and the major support level is $0.165. 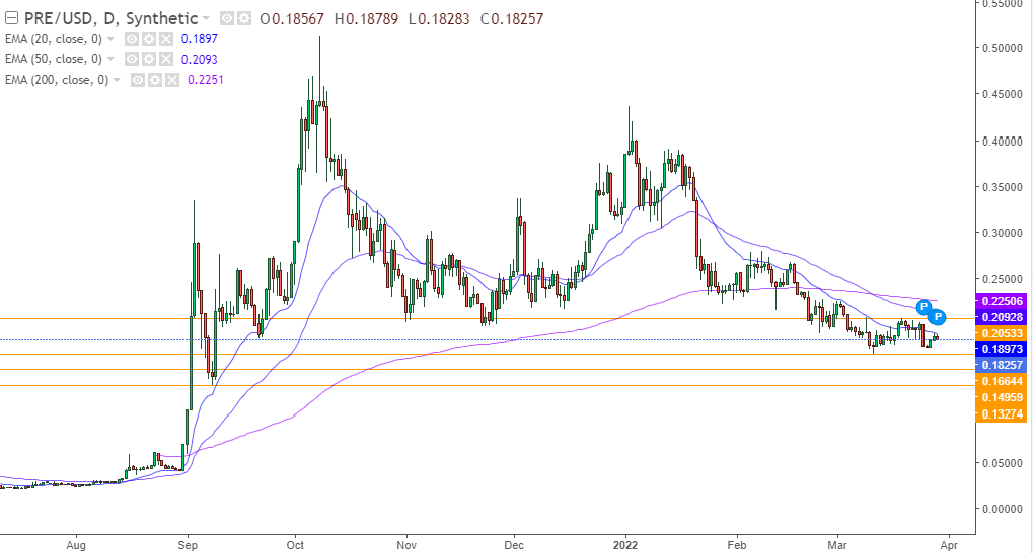 On the technical chart, Presearch trading price took support at $0.1897, it might trade upwards by breaking the resistance level of $0.209. As per current price data, in the near future, if Presearch can break the major resistance level of $0.209, profit booking can be witnessed before breaking an all-time high. Presearch (PRE) price on the technical chart is below its 20 EMA, 50 EMA, and 200 EMA, which is a positive sign for the Presearch investors. 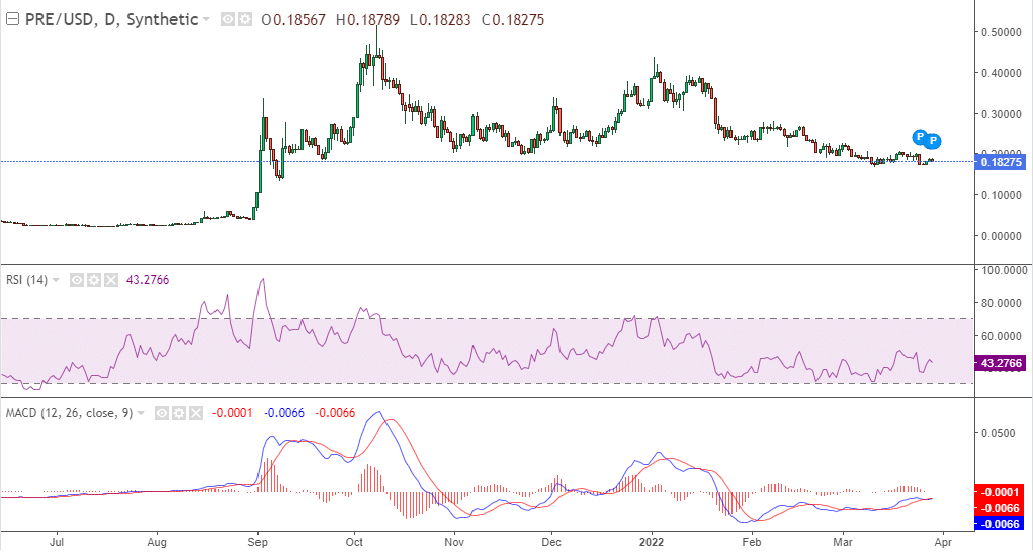 RSI indicator is around 43.27 which is moving towards the over sold zone. MACD has been trading below the signal line on daily charts.

The future price of Presearch is forecasted to cross $0.39 levels till the year 2026; there are no sell Presearch calls as of now. The technical setup is a buy Presearch call for the short term, apart from minor corrections on the daily price chart. Presearch price may not break the major support level as per experts’ price predictions.

Investing in Presearch is a good short-term opportunity for cryptocurrency enthusiasts who has a Presearch PRE investment in their portfolio. Apart from the highly volatile nature of cryptocurrencies, there are no other sentiments of a bear trend in Presearch.


As of now, the Presearch price is trading around $0.1595. On the upside, it might cross $0.30. All the indicators are positive, generating buy signals for the short term based on Presearch price prediction and technical analysis for the near future.

Bitcoin is trading towards $43,593.43, and the major altcoins are reflecting significant price action. Based on our technical analysis and predictions, the PRE price might continue to trade upwards. However, traders should do their own research and track technical analysis and price forecasts before investing in Presearch. The minimum price of Presearch was $0.43 at the beginning of the year, expected maximum price change will fall to $0.27. the average price of PRE will be around $0.25.

During the initial months, the PRE price will be trading around $0.31 levels. The expected average price of the trade is $0.26 levels in 2024. With the current pace, it will continue higher high formation. Traders need to accept the volatility, its hike and drops.

As per analysts’ technical analysis and price prediction/forecast reports, Presearch will be a profitable investment over the next five years. The volume of the token will increase, and circulation is also getting increased, once it records significant price rise. Long-term price forecasts show that, by 2025, the Presearch price will be trading to $0.46 with an average price of $0.35 by breaking the previous maximum price level of PRE.

Based on our Presearch forecast, the coin price might reach $0.38 which will be less than the maximum price of the year 2025. The average price might be $0.34.

Is Presearch a good investment?

According to our price prediction, Presearch will be a good investment option due to possible mainstream adoption in the long term. It holds the potential to be a profitable investment in the future. Investment is a part of financial decisions. The above-mentioned price prediction/forecast and Presearch cryptocurrency are for educational and informational purposes. The price of Presearch PRE depends on various factors.

Where can I buy PRE?

Presearch is available with all the major crypto exchanges such as Kucoin, ProBit Global, HitBTC, etc.

Does the Presearch price rise for the future?

The cryptocurrency market is not precisely predictable. Amid global sentiments, sudden price changes are part of the crypto community. Based on our price predictions, the token price is forecasted to grow significantly in the long term.

When to buy Presearch (PRE)?

Currently, the Presearch price reflected a good momentum on the chart. Investors who have Presearch in the portfolio can hold the coins. Others can wait for a pullback to invest. Users need to track research data and find out the accurate price forecasts at which they can enter.