Electroneum (ETN), the world’s first-of-its-kind KYC compliant Cryptocurrency has been targeting mobile users for faster growth and adoption at a global level. Incepted in 2017, the crypto is gaining momentum faster than ever & already being used for smaller day-to-day transactions involving buying grocery. Features like faster money transfer without any middlemen have cut it for this crypto, and soon it is expected to soar higher exponentially owing to increasing smartphone users globally. The application is user-friendly, easily accessible and enables secure transactions on the fingertips. The community of ETN is growing faster with over 2,945,108 registered users already. 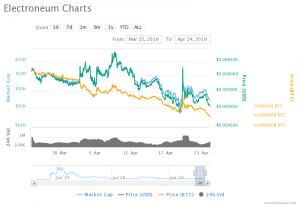 The ease-of-adoption has led to the increase-of-growth for this crypto. Many investors, businesses and enthusiasts are anticipating rapid upward movements in the prices in coming years. A unique business model, rewards for users, referral programme among other promotional methods is resulting in viral acceptance. Moreover, the roadmap of Electroneum looks highly promising and has always been kept very transparent for the users to decide while investing freely. The beginning of the year saw significant moves as the team signed formal agreements with Hong Kong Joy Telecom Co. Limited & One Development Thailand. With the launch of plug-in including Joomla, Wordpress, and Magento, it’s only a matter of time that the coin will start showing returns. A little patience is what is required for the ETN supporters. From a two year perspective, the price can shoot up to 0.01 USD and can reach as high as 0.1 USD in the next five years.