Recently top cryptocurrency research and news portal, Messari has published a report stating that Ethereum coin (ETH) is one of the Top 10 ERC20 compliant coins to have faced abrupt downward movement after the 2018 bearish market or the crypto winter. As per the report, Ethereum’s all-time high was 1431.77 USD, and currently, the coin’s value is hovering around 81 USD.

ERC20 is technical protocol standard which implies some specific rules regarding smart contracts and token on Ethereum’s network. ERC stands for Ethereum Request for Comments. It should be noted that most of the tokens issued on the Ethereum blockchain network are ERC20 compliant. As per the latest data, 181,799 tokens on the Ethereum blockchain network are based on ERC20 protocol. The ERC20 crypto assets can be traded like any other crypto coins, but they lack their own blockchain platform, rather depend on Ethereum’s platform.

The fall of Ethereum-

The market for Ethereum token fell like anything in 2018. The all-time high price is almost 10 times the current price. There are certain reasons attached to the fall.

As Ethereum has bubbled in a speed it was never meant to, a market correction was expected. It is normal for any asset to have market corrections at regular intervals. Many major coins like Bitcoin (BTC), Ripple (XRP), etc. have been through it.

This implies the fear of missing out. As the value started to increase, the hype over the internet got built up. This added many investors pushing the price to an even bigger level. This attracted many speculators as well.

As the crypto market was filled with speculators, the patience factor was missing from the investors. This led to crowding out by investors.

There is no denying that the crypto bubble is yet to be busted. There are many factors like speculation, panic, fear is present in the market. So, a swift and small change has a much bigger domino impact on the coins. 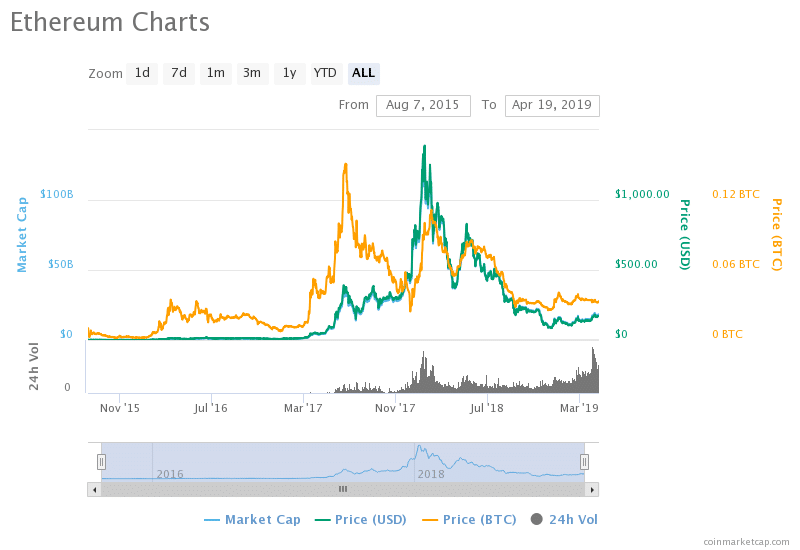 The market boom has inflated the value of Ethereum Token by a large margin. On January 14, 2018, the market cap of Ethereum Token (ETH) was 133,588,759,230 USD. And the value of each coin was 1377.72 USD. The current market cap has enormously degraded by 86 % in these 15 months. The same way the value of each coin has deflated by 87.51 %. The market has felled downward growth all through the duration. It has risen in between for a few days, but it could not sustain the momentum.

The Price is now hovering around 165 USD to 170 USD. The value will definitely rise, as per our ETH Price Forecast. As market correction has already happened, it may go swift from now onwards. The next resistance should be there at 182 USD. But, the long-term outlook seems bullish. The falling trend has gone past. Long-term investors should not worry much now. They should realize a good percentage of profit by 2019.

Ethereum, Too Starts Following the Bitcoin Way of Moving Up!

Ethereum Shows Its Strength; Just 10% Short of Its All-Time High!

Ethereum Fails to Break 100 DMA Even After Multiple Attempts!