Binance, the largest crypto assets exchange platform has been one of the most prominent reasons behind the enormous expansion of the crypto economy. The exchange platform is now all set with its much-awaited launches.

Binance revealed its plans to launch a decentralized exchange (DEX) in 2018. Not much info was available regarding the new launch at the time, though the CEO at Binance CZ had released a “casual, rough, and pre-alpha” sneak peek of the platform. Now, it is found that the famous exchange platform is moving over the Ethereum blockchain, and will be launching DEX in a couple of weeks. 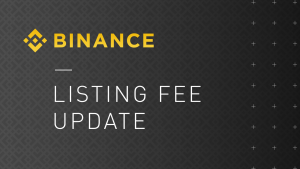 The CEO Changpeng ‘CZ’ Zhao conducted a Q&A live stream on Thursday, where he detailed about the upcoming launch. According to him, Binance DEX’s testnet, which is developed on the Binance Chain is set to launch “in the next week or two.” In the session, he also talked about the launch of Binance Chain. Zhao stated that Binance Coin (BNB) will also be moving from an ERC20 token and operate as the native gas of Binance Chain. BNB was issued by the company in 2017, raising $15 million from its ICO.

DEX will provide services as a non-custodial platform. Regarding the DEX, Zhao believes that it will have a lot of impact on the network and the validators in its initial stages. He noted,

“I think it’s important for us to maintain that influence in the early stages. As time goes on, more and more validators will join, and our influence will decrease.”

He also talked regarding the DEX fee structure. DEX will charge a small fee from each trade, along with a listing fee for projects that launch their token. Remarkably, the listing fee is as high as “probably be close to $100,000.” However, Zhao says that the fee will be easily adjustable in the future. Explaining about the fee, he said,

“I want to deliberately set [the listing fee] little bit high because we want to reduce the number of spam or scam projects. There is also a voting process by the validators to be listed on DEX.”

With that, the exchange firm also intends to enable some more features on the DEX platform such as cross-chain interoperability.

Why Business Enterprise Should Start Accepting Cryptocurrency as Payments