TRON currently holds the 28th position in terms of market cap with a combined value of $6.76 billion and above 71 billion coins in circulating supply. Unlike other cryptocurrencies, TRON is focused on the content sharing and entertainment industry and intends to rule the content creation domain, starting with the gaming industry. It allows creators to launch their personalized token using their own blockchain network and decentralize the gaming industry in particular.

TRX came into too much limelight in 2018 after it announced acquiring the file-sharing platform BitTorrent. Applying blockchain to drive faster transactions has provided TRON with a leap in the content sharing industry. This transaction system is beneficial for both content creators and viewers, and it clamps down on the middlemen. Creators wouldn’t have to take commission haircuts, and viewers can get authentic, unrated content at a premium cost in direct markets.

Tron has a total outstanding supply of close to 100 billion coins. It uses a delegated proof of stake algorithm to support the transactions. TRX owners can freeze their crypto holdings to get Tron power and get the opportunity to work as block producers. The revolutionary idea and customers at your fingertips allow TRX to become a much stronger cryptocurrency in the coming days.

TRON price has entered into a tight consolidation zone and has created a double shoulder and head pattern in the last month. This could lead to a massive sell-off in case the 200 DMA curve gives away to selling pressure. 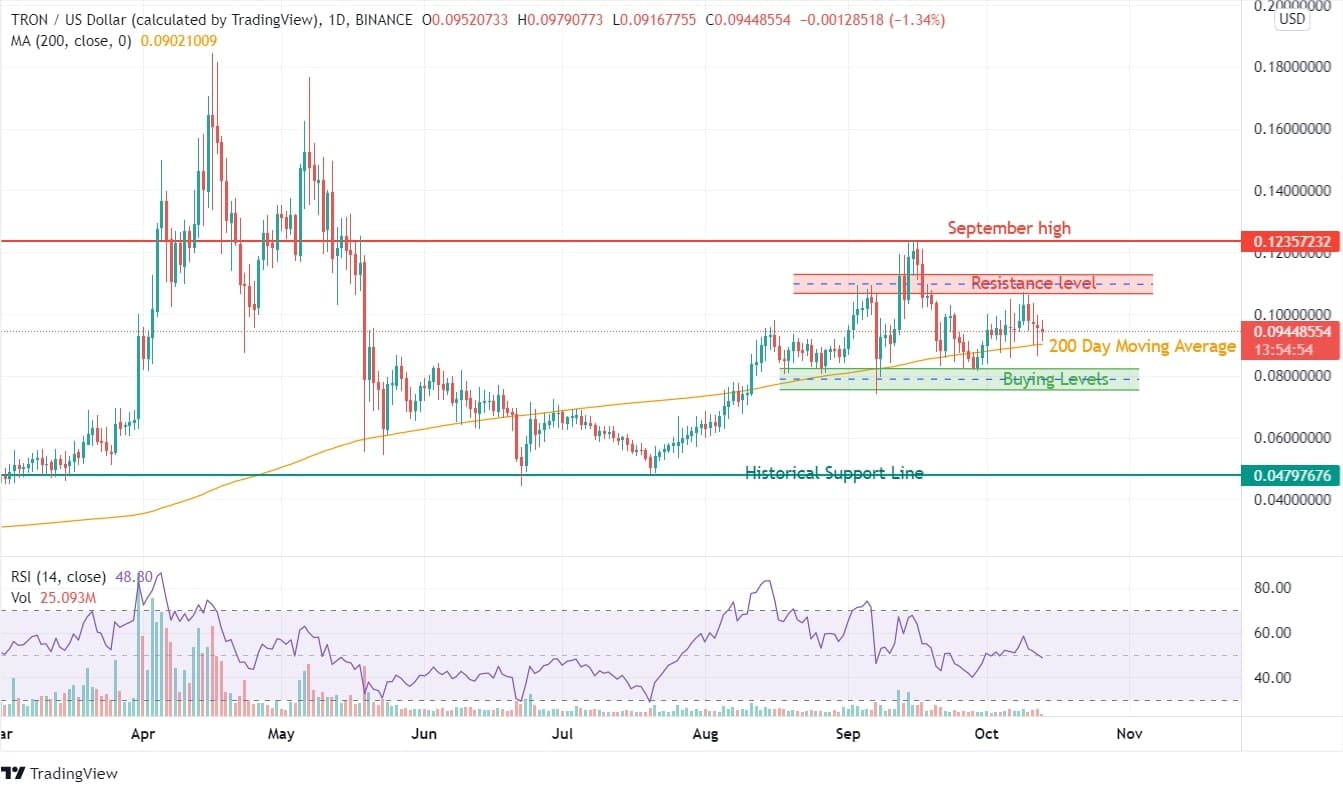 TRON can be seen suffering from a lack of buying or transactions as compared to the volumes we witnessed in April 2021. Historically, TRON is in an uptrend with a higher inclination to mark a new higher. The level between $0.106 and $0.1134 has emerged as a rejection level, while the $0.082 level has become an ideal buying level.

As a result, price action has been chiefly stagnant in this region. TRX is awaiting a breakout, and considering the trend, it has a higher probability of reaching new highs as per TRX coin price prediction.

Despite trading in the middle range of 50, RSI can reach the $0.14 level, while the volumes have mostly dried down. One can expect a sudden price movement as buyers get into action. For now, the 200 DMA of $0.0903 is a critical level to indicate any change in trend. $0.1215 is the higher value TRX reached in September and has failed to reach the level so far in one month.

Derived Set to Launch IDO to Kick Off Leveraged Staking