Despite maintaining its position as the top blockchain contender for 2022, Bitcoin has a lot of upcoming challenges on its way. Elon Musk is a popular name that can disrupt or create a shortage of tokens based on his perception of cryptocurrencies and their technologies. The day news broke out of Musk’s successful acquisition offer being accepted by the Twitter board, instead of creating a rally, it has created a market shorting scenario.

The answer to this question can be linked with Elon’s entire wealth being connected with the market capitalization of Tesla Motors and its subsidiaries. Musk has pledged his shares to fund this acquisition, and BTC has no direct relation to this newly acquired stake of, Elon.

Still, at the same time, the world knows Tesla made a $1.5 billion investment into Bitcoin back in February 2021, which could amount to a similar value as it was repurchased then. While this value is barely 0.2% of the total BTC market value, in case of fresh funds requirement, Musk can quickly liquidate this investment, causing widespread panic for BTC investors.

Fundamentally BTC has no value apart from its storage value and widespread user base. Still backed by mining operations that heavily rely on renewable energy, BTC surely cannot remain the top cryptocurrency when others are trying to find ways to reduce energy consumption by overlooking the validation process accepted by its blockchain. Based on the Bitcoin prediction, the price trend could dip further to new levels in the coming days if the selling sentiment remains heavy on the investors. You can visit here for more information from our forecast page. 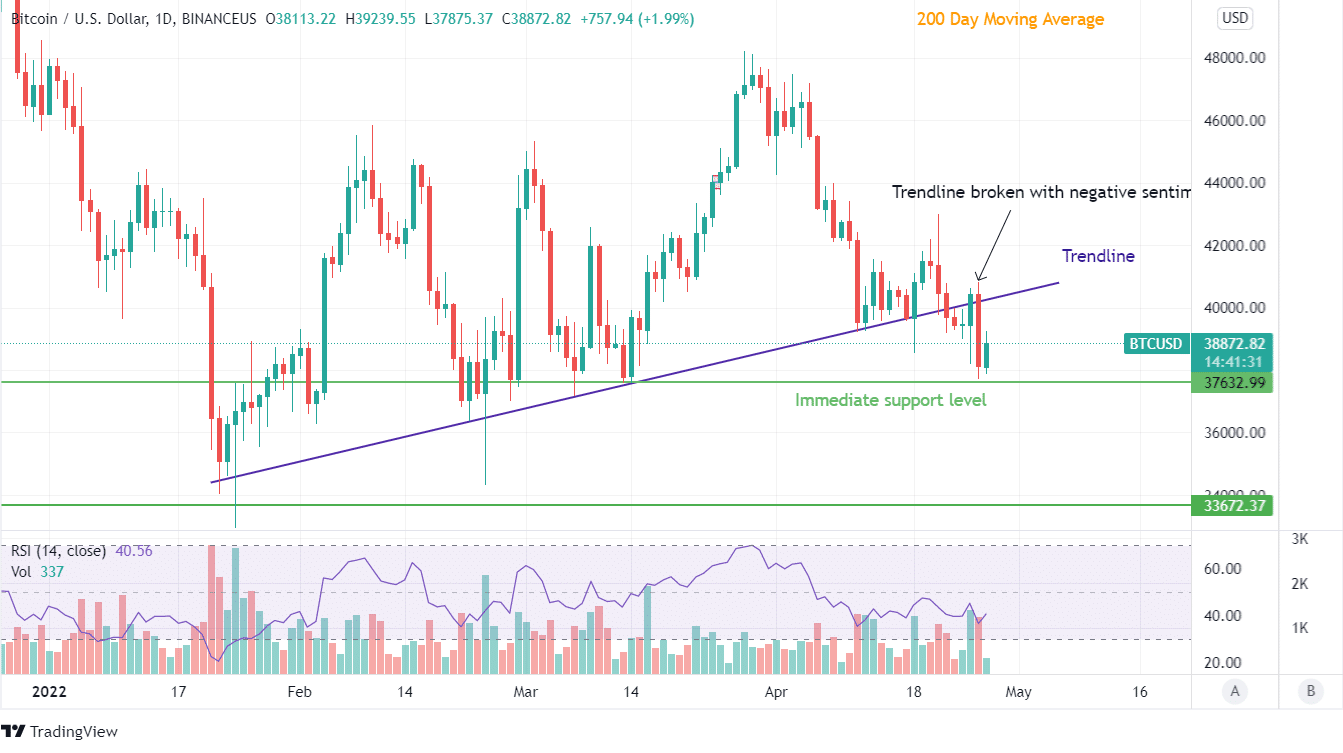 The Bitcoin price trend has once again become negative as it failed to respect the trendline that was being formed for the last three months. BTC tanking from $48,000 to $37,000 twice within a year indicates negative sentiment. Investors are hoping for a positive breakout, but BTC is trading below its important moving averages, and failure to take support from the immediate level of $37,500 would lead to further loss of value, as the next historical trend support lies at $33,700.

RSI has moved down from close to overbought zones at the beginning of April 2022 to negative with a current RSI of 40. Transaction volumes have taken surprise jumps, but such a trend will continue for some time. On the flip side, a bounce back from $30,000 can be expected since investors would be looking to buy more Bitcoins at a discounted price.

Bitcoin Is Down: Are You Expecting a BTC Miracle Again?