Litecoin is a decentralized, open-source payment network that operates using a cryptocurrency called Litecoin (LTC). The network is secured by cryptography, and transactions are verified by network nodes through the use of complex mathematical algorithms.

Litecoin is a peer-to-peer network, which means that there is no central authority or middleman involved in the transaction process. Transactions are processed and verified by the network as a whole, and the network is powered by a Proof-of-Work consensus mechanism.

Litecoin was created in 2011 as a fork of the Bitcoin software, and it was designed to be a faster and more lightweight version of Bitcoin. It uses a different mining algorithm (Scrypt) than Bitcoin (SHA-256), which allows it to be mined more efficiently with consumer-grade hardware.

Litecoin also has a faster block time than Bitcoin, which means that it can process transactions more quickly. Overall, the fundamental characteristics of Litecoin are similar to that of Bitcoin, with some key differences that make it a more lightweight and efficient version of Bitcoin.

Currently, the market capitalization for LTC remains above $5,494,863,508, while the year 2023 has begun positively. The previous resistance and selling zones might create repeated trouble but the outlook for this token remains strong and positive.

The reversal from the 100 EMA curve has changed the possible negative movement of Litecoin towards positive consolidation and retesting the selling pressure. With back-to-back candles ending in green, the positive sentiment has skyrocketed in a short interval. Will this positive outlook continue for LTC? Read our Litecoin price predictions to know! 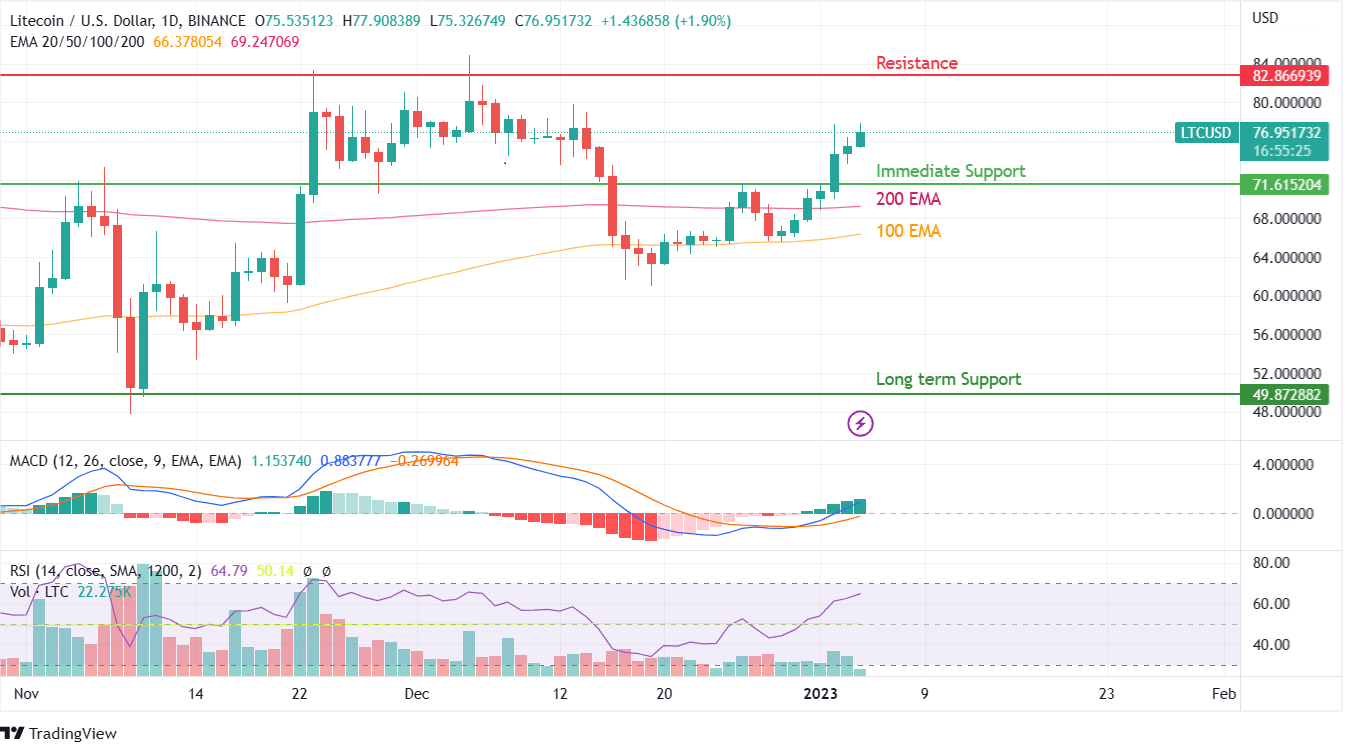 With a decently strong beginning for the year 2023, LTC has jumped above 12% in the first four trading days of 2023. As such, the intensity of buying sentiment has spiked from near oversold zones of 40 to extreme positive levels of 64.

MACD, in the meantime, has created a bullish crossover and jumped aboard the positive axis of its divergence. The price action of LTC showcases the consolidation zone of a previously failed movement to have begun. If Litecoin manages to overcome $80 on a positive note, a massive rally is expected to support the price toward $100.

On the contrary, failure to breach the resistance of $80 would still provide consolidation and breakout support from 100 EMA, 200 EMA, and $71 immediate support. On a real note, $77 is the resistance zone begins as the remaining movement has quite often ended on a wick or shadow.

On a weekly candlestick pattern, LTC is moving positively for the third straight week, with very unusual and positive support from the technical indicators, be its MACD or RSI. Breaching $82 would be the target movement of buyers in the short term.

On the upside, there shouldn’t be any hindrance till it reaches a higher psychological level of $150 or $200. Hence, a decent beginning of 2023 could create a bullish rally after the unfavorable movement for the entirety of 2022.