In the recently held annual session of the Islamic Chamber of Commerce, Industry and Agriculture (ICCIA) of the Organization of Islamic Cooperation (OIC) in Jakarta, Noorcoin launched its application demo testnet for the OIC member nations.

The OIC is the second largest inter-governmental organization after the United Nations and has a membership of 57 countries spread over four continents. The Organization ensures to safeguard and protect the interests of the Muslim world in the spirit of promoting international peace and harmony among different people in the world.

Noorcoin is the world’s first sharia-compliant utility token. Using the latest smart contract technologies which promote efficiency and accountability, Noorcoin would be created at the Zilliqa blockchain platform. It strives to serve the needs and provide solutions to at least 1.8 billion Muslims.

Speaking on the development, Founder and CEO of Noorcoin, Sofia Koswara said,

“OIC member countries, such as the kingdom of Saudi Arabia was very serious about using Noorcoin. Banks in Saudi Arabia to the Zakat Council in the country began to think about the use of digital money as an alternative to long-term financial transactions. We believe once the application demo is completed, Noorcoin will reach acceleration in a few months.”

Once live, merchants will be able to accept Zilliqa based cryptocurrencies and exchange them with traditional (fiat) currencies.

Refuting all allegations that the concept of cryptocurrency is against Sharia law, Thomas Yudhistira, COO of Noorcoin, states that Noorcoin is a fully Shariah compliant product. As a result, Noorcoin would be compliant to national sharia regulations, which will be proven with this testnet.

“The application demo was run using Ethereum Virtual Server and Ethereum Ropsten Testnet before full implementation and transition on Zilliqa blockchain platform around Q1 2019. This is to show Noorcoin’s mobile application demo’s potential and usability for the Muslim community. Also in a later stage after ICO, Noorcoin also plans to back its cryptocurrency with gold, to increase stability and security for its holders.” 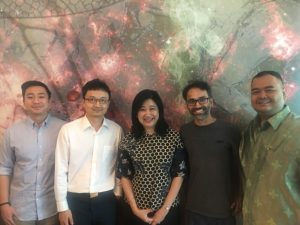 HE Osamh Mohammed Abdullah Shuibi, Ambassador of the Kingdom of Saudi Arabia to Indonesia who attended the launch applauded the initiatives of Noorcoin. He believes that in addition to financial transactions, Noorcoin would serve as a useful currency to fulfill religious and citizenship duties like Umrah and Hajj.

He also pointed out that currently, some countries are experiencing a weakening of the currency against the US dollar. So, it is imperative to have a solid alternative to the US dollar and thereby, reduce its dominance.