STEPN was quick to rally on investors’ support as it offered a unique perspective towards health and walking benefits by connecting them with rewards token methods. The token is a Web 3.0 lifestyle application with a projected play-to-earn model developed on the back of Solana’s effective blockchain.

Its governance token GMT stumbled to fresh lows within a short period because of the limited supply that has entered open markets. With its market capitalization of $628,090,088, only 10% of GMT is under active circulation. Since a major chunk of its governance token is yet not unlocked, the real potential of this GameFi project cannot be estimated without unleashing the entire governance.

GMT still ranks amongst the top 100 crypto tokens, and with diluted value, it would easily be under the top 20 crypto tokens. Hence, one should not underestimate the growth potential and scalability of GameFi tokens.

Its utility token GST is earned through the running or walking activity; hence there cannot be a cap over this token, and users would be looking for ways to sell their holdings to gain from this ecosystem. The right balance between the GST token price and actual interested buyers would be the key to scaling this GameFi Web 3.0 project.

STEPN’s GMT token has lost significant value from its sustainable highs and its pre-crash support levels near $2. The vengeful profit booking on its GMT token caused a ripple effect pushing the value down from $4 to $1 within just two weeks. This indicates a furious profit booking sentiment at play. 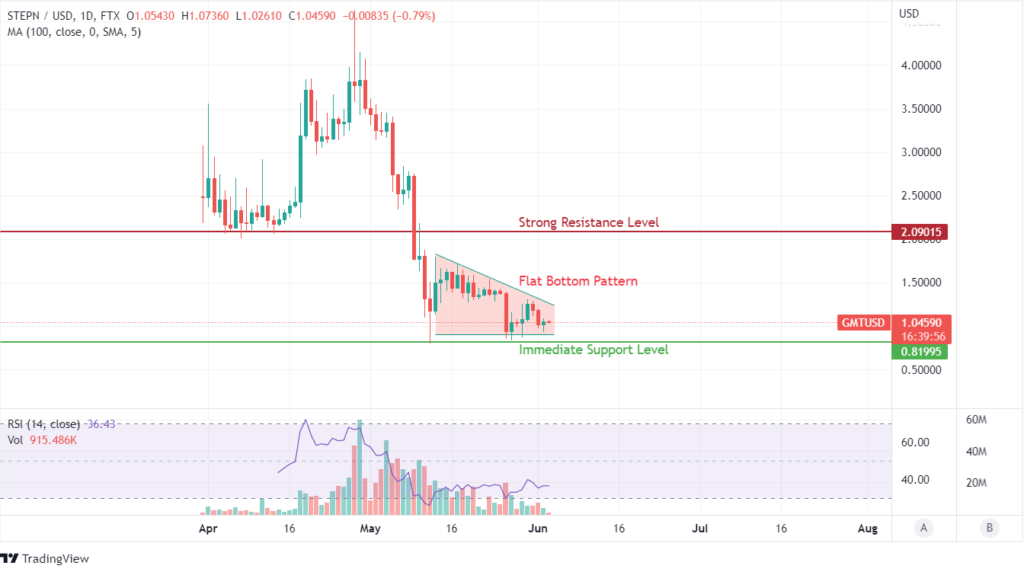 Since hitting its fresh low of $0.92 on May 09, 2022, STEPN enthusiasts seem to have returned to action, but they have failed to dent the negative sentiment looming over this cryptocurrency. The swift fall in value raised some eyebrows as people started to distance themselves, remarking GMT as a possible fraud ecosystem.

Two subsequent profit bookings within a month can dissuade even the strongest investors. Currently, GMT is forming a flat bottom pattern where despite its limitation to make fresh highs, it has at least taken support from a lower value of $0.8.

RSI indicator shows some initial trend reversal signs as transaction volumes have started to dip, indicating more single side trades. GMT will need to breach the $1.65 value to showcase a positive sentiment in buying to challenge $2, which would be its immediate resistance hindering its potential to realize previous highs.

Speculations can hinder the positive trend as STEPN is a new crypto. Still, one needs to be aware of the real potential and ideology behind crypto to ascertain whether it is a good investment or not!

IoTeX Ecosystem Teams Up with HackenProof for Better Security