BitTorrent was set up by one of the most promising cryptocurrency Tron. BitTorrent coin aimed to make the internet wholly decentralized without a single constraint. The vision of BitTorrent is to tokenize the protocol used for decentralized file sharing. The TRC-10 utility token backed by BitTorrent (BTT) is based on the Tron blockchain system, and it allows the content creators to connect to their audience, earn and spend digital currency without anyone to mediate. BitTorrent tokens can be used in bidding in exchange for faster downloads, or the BitTorrent client can use it. 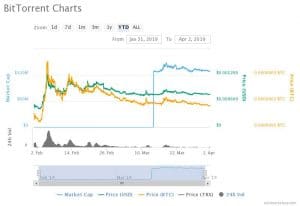 The growth of BTT for the last month has been steady. As the ICO of BTT happened only on March 13, comparison with the price in USD and BTC is possible to check the trend. The value of each coin was 0.000781 USD and 0.00000020 BTC on March 2. The current price of each coin in USD is 2.30 % less than the price of March 2. The value of each coin has drawn almost a fine line on the graph, but the market cap inflated just after the announcement of ICO. Due to its parent company’s performance and its goodwill, the ICO gave better than expected results.

The newly established cryptocurrency has much to promise. Though the ICO was overhyped, the future for long term holders seems bright. After the initial boom due to its launch timing and launch backing, it almost steadied on the growth rate. But, the performance of BitTorrent (BTT) has never been bad for a newcomer. Experts have believed that the price in terms of USD will surely move higher due to its parent company’s better performance in the market. But, there are some reservations regarding the regulation on file sharing platform. Some believe that the original file-sharing platform has many effects on the pricing of this crypto. However, investors should aim for 0.0015 USD this year, and it may grow around 20 times by the end of year as per our BTT price prediction 2025. So, holding the new coin till its good times is the key here. 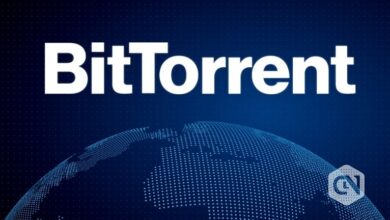