Cardano is a hybrid cryptocurrency, an advanced and efficient combination of Bitcoin and Ethereum. Bitcoin blockchain is based on finance and revenue, and Ethereum is smart contracts based on blockchain technology. Cardano facilitates both the platforms and uses the best of both. In simple terms, Cardano is a decentralized, blockchain based system, powered by the ADA coin that runs on the Cardano platform. It is also a smart contract-based system and is used to control Decentralized Apps also known as DApps. However, Cardano is a two-layered system – one layer manages the DA exchange, and the other layer runs the smart contracts. It is also the first peer-to-peer transaction system based on scientifically tested theories. 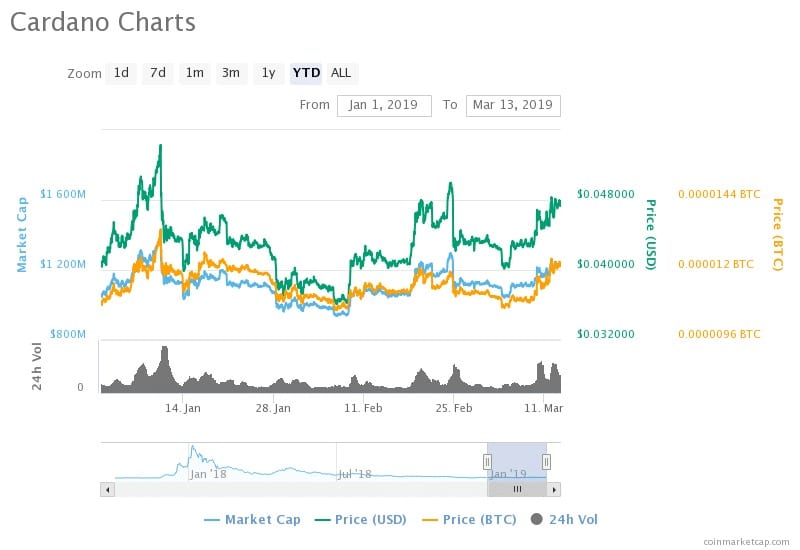 According to reports from Coinmarketcap, the market cap value of Cardano (ADA) as on March 13 at 13:19 UTC is USD 1,231,306,034. The corresponding price of ADA/USD pair and ADA/BTC pair are USD 0.047491 and 0.00001216 respectively. It is the 11th largest cryptocurrency in the market. The Markcap value has been majorly on the uptrend, with a consequential decrease in values. The market Cap traded at 1060 million USD at the beginning of January and peaked to 1400 million USD January 02. However, there has been on downdrift ever since. The reduction in values prevailed between January 10 and February 08, reaching its lowest of USD 939,288,944 on February 08 at 07:34 UTC which is 31.09% lower than the current value. There was an elevated percentage value of 37.95% between February 08 and February 24 when the numbers rose from the all-time low to its all-time high of USD 1,295,790,962 on February 24 at 12:34 UTC. After the brief enhancement, the values descended to the current value. The Market Cap value shows an insignificant increase with the 14-day moving average. The MCap value exhibits a 9.32% growth. The inclinations in values show that the market has been under the bullish pressure.

The rise in values has been pivotal. Hence the overall market is considered to be on an uptrend. The price of USD has been on the lead followed by the MCap/BTC pair of ADA. An analysis shows that the price of BTC had dropped from an all-time high of 0.00001337 on January 2, 2019. The high values did not sustain for long and have been on a downtrend reaching its lowest on February 08 with a value of 0.00001067, a 20.19 percent decrease. The values rose to the current value, with a percentage rise of 13.96 and have been significant. However, the MCap value of the cryptocurrency surpassed the bitcoin’s value from the beginning of the year and has been stable. The MCap/USD of Cardano reached its all-time high on February 24, when MCap value reached its high of USD 1,295,790,962 at its peak price of USD 0.049978. Nevertheless, the milestone ADA achieved was proved in February when it rallied from a low of $0.040612 on February 17 to a high of $0.048011 on February 19, which is 18.22 percent increase within a short time of 02 days.

The 20-day EMA shows that the current market is on the uptrend with respect to MCap and price of USD. The moving averages and the overall market are on the uptrend. This points the balance in favor of buyers. Hence Investors with long term investments would find it suitable to invest in this cryptocurrency. Traders can also earn a profit from their transactions due to the rising market. Investment from traders will increase the value of the cryptocurrency in the future.