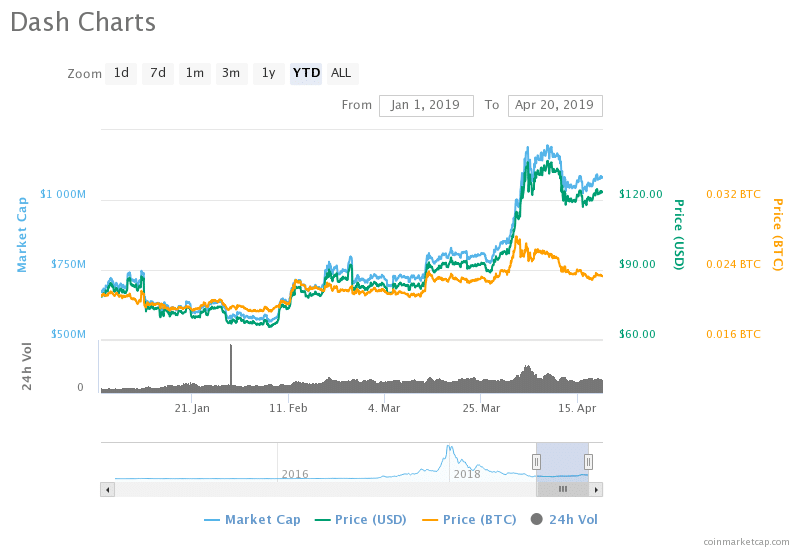 Dash coin (DASH) has been subject to many inconsistencies in the last 100 days. Dash coin started the year with 79 USD price level. It has gone through many ups and downs. The lowest point was reached on February 7 at 66 USD price level. But, the fall was temporary. It soon gained momentum. But the highest percentage of growth was seen after 1st April. Dash coin (DASH) gained almost 30 % in 3 days. But this gain was also temporary. The market is going through a price correction stage. The same is happening with Dash coin as well. It is now being traded at 123 USD level. The market cap on 20th March was 805,886,400 USD. The value of each coin in terms of USD and BTC stood at 92.65 USD and 0.02288512 BTC respectively. The current market cap is 34.24 % more than the market cap of 20th March. And the value of each coin has gained 33.3 % in the last 30 days.

As mentioned earlier, the coin is in the price correction stage. The value may further fall to 110 USD level. But after that, it will grow gradually. Any quick upsurge is not anticipated for now. The long term outlook is absolutely bullish as per our Dash Forecast. The price by the end of next quarter should be at 135 USD to 145 USD. We predict the coin to reach 200 USD by the end of the 1st quarter of 2020.

Short term holders are advised to wait for the price correction to end before buying more coins. Long term holders should stick into their investment.

Bitcoin (BTC) Statistics At Glance: Is Bitcoin Going Through a Price Correction?

Blockchain IoT Startups Are Kicking Up a Storm