Dogecoin is a  blockchain based peer-to-peer cryptocurrency that was introduced into the market as a joke but eventually found a purpose as a more friendly and approachable alternative to Bitcoin. It was designed to cover a large community of users who have no access to Bitcoin due to its cost. Dogecoin uses the decentralized approach to producing new tokens and DOGE is created by its community. The basic technology behind Dogecoin is based on Litecoin which uses the auxiliary Proof-of-Work consensus algorithm.

Dogecoin has experienced a fairly turbulent history and is prone to abrupt price changes, and hence the cryptocurrency in itself is highly volatile. This is majorly due to the disaster that stroke the cryptocurrency when a hacker gained access to the file system of Dogewallet and manipulated its send and receives function. Twenty-one million DOGE coins were estimated to be stolen during the hack. However, the cryptocurrency was brought back to life by its community users who had donated enough coins to compensate for the loss. The crypto coin’s market cap value briefly surpassed the Bitcoins’ after they come back. One hundred billion coins were mined and circulated by mid-2015. Then the generic improvements, there hasn’t been any major update on the digital currency since 2015. The coin’s popularity surfaced in 3018 when the market cap value hit 2.0 billion dollars. 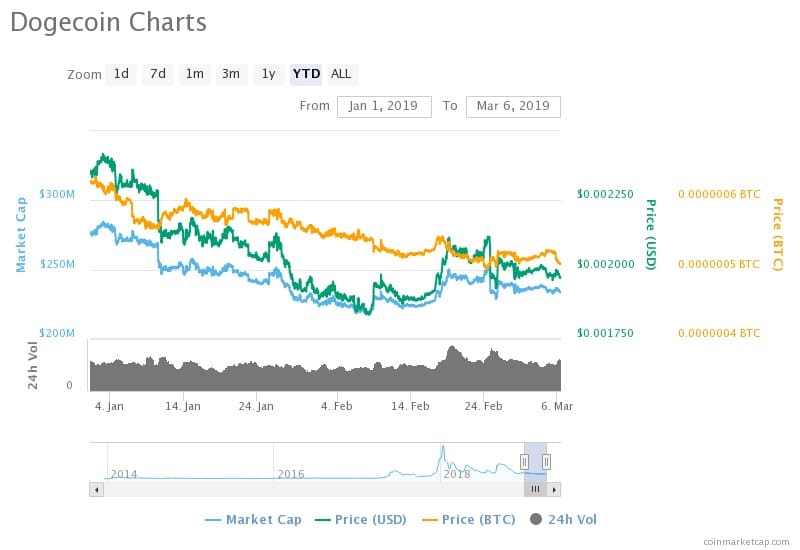 The price of DOGE/USD pair is $0.0019730, and that of DOGE/BTC is 0.00000051 as on March 06 at 10:44 UTC. Based on the analysis by Coinmarkcap, the data about the trading moment of price and Market Cap value has been deducted. The reports show that the price of BTC has been ruling the market with the MCap value and price of USD beneath. However, the MCap values and the price of BTC merged on January 11, 2019, and after which the Bitcoin’s price took the lead. The price of USD was at a peak with the MCap value on February 24 with a value of $0.002120 USD and the price of BTC was high on January 26 with a value of 0.00000059. The prices then started deteriorating. Whilst BTC had a decreased percentage of 13.56 from its peak value, USD decreased by 6.93%. The prices have almost been linear since February 18. There have been many insignificant dips and rise with prices being range bound. Nonetheless, the cryptocurrency reached its milestone between February 12 and February 19, when price rallied from $0.001877 to $0.002116 with a 12.73% increase in a span of 7 days.

The 14-day moving average shows values descending from $244,445,460 USD on February 20 to $233,842,507 USD (current value) and a 4.34 percentage decrease. With both the averages going in opposite directions, the cryptocurrency has been neutral. However, the gradual improvisation shows the bulls pressure on the market. Hence, investors with long term investment plans would find the market in favor of them. However, traders with short term investments will have to observe the market trend before investing. Once the values increase steadily, it will turn out advantageous for the traders, and they will attain more benefit from it.

Dogecoin Rhymes the NEGATIVE Movement Just Like Any Other Altcoin