Litecoin (LTC) is a decentralized cryptocurrency, a project of Bitcoin intended by its designers to be more feasibly mined using consumer-grade hardware. Litecoin is a peer to peer cryptocurrency and has an open source code that enables instant non-zero cost payments to anyone and everywhere. Unlike Bitcoin, the Litecoin blockchain is able to process a greater number of transactions. Litecoin uses the memory intensive Scrypt proof of work mining algorithm. Litecoin features faster transaction confirmation times and improved storage efficiency than the leading math-based currency. With substantial industry support, trade volume and liquidity, Litecoin is a proven medium of commerce complementary to Bitcoin. 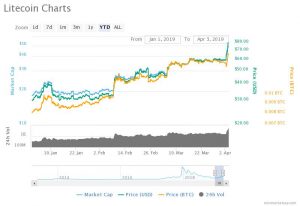 Litecoin is enjoying a strong start of the bullish market for a medium span of time. As per LTC Price Prediction, since the coin is being accepted at various supermarkets and shopping centers the value is likely to reach $250 real soon according to the demand. Thus, it can be a staggering investment today.

Tesla CEO Declares His Favorite Digital Currency; And It is Dogecoin