Verge is a cryptocurrency that is known for its total anonymity and privacy for its users. It implements advanced blockchain technology on top of services such as Tor and I2P which hides users’ geolocation and IP-addresses. With the plans of RSK technology, XVG would offer smart contracts functionality with the anonymity feature, hence being the only crypto combining such features. 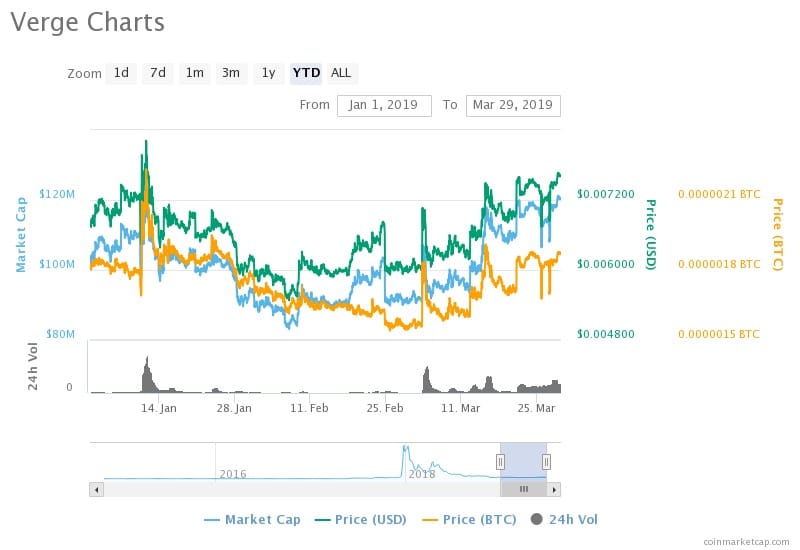 The price predictions for the cryptocurrency can only be approximate due to its volatile nature. According to wallet Investor, the bullish pressure continuous further, until the end of 2019 with the values reaching up to 0.138 USD. The positive outcome of the cryptocurrency is expected until 2024 with a hike percentage ranging between 2% and 3%. Mega Crypto Price estimates the price to boom by 2020 with the value of 0.7401 USD, and in 5 years times, the coin will be traded for 2.39 USD. Coin fan technical analysis is considerate with the percentage increase and predicts the value to reach as high as 0.172 USD or if low, 0.127 USD by the end of 2019. By 2020, XVG would be selling at 0.45 – 0.61 USD per coin. These predictions might work out well with the release of the IOS wallet (under development). Coin switch expects growth in demand for the cryptocurrency by 2020 and the price might reach as high as 0.2069 USD by 2023.

The current market trend with the continual stabilized growth backs the predictions completely. However, XVG has been volatile in the past, if this subdued volatility continues; XVG will be in its prime by the end of 2019. Nonetheless, the current market attracts buyers with its inflating prices. Long term investments will produce higher outcomes in the future with this market in favor of the investors.