Dash (DASH) is privacy centered crypto coin. Previously known as Darkcoin, it facilitates anonymous and instant transactions to the users. The transactions are done on a network called DarkSend. On the payment and settlement system of Dash (DASH), this protocol is of much importance as tracking of transactions and coins is impossible due to the concealing of IP address. It also uses InstantX technology, which makes the transactions super-fast and irreversible. 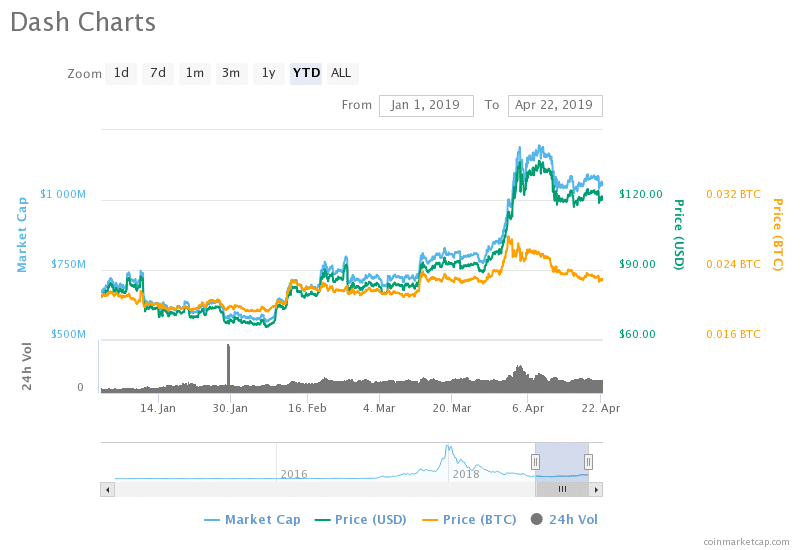 Right after the crypto winter, Dash coin started the year 2019 with a value as low as 79 USD. It has been subject to many variations in pricing, the lowest point at 66 USD was reached on February 7th. However, Dash coin managed to grow after that. The highest growth was achieved after the April 1st market boom. It gained around 40 % in just 4 days. Then Dash coin has experienced price correction. Now it is going with a stable pace and is hovering around 120 USD value. The market cap on 22nd March was 791,817,376 USD. The value of each coin in terms of USD and BTC was 90.99 USD and 0.02260620 BTC respectively. The current market cap is 32.97 % more than the market cap of 22nd March. And the value in USD has gained by 32.04 % in the last 30 days.

The coin is now growing at a stable pace. But it will soon gain momentum. The resistance should be at 130 USD. From there it will degrade its value a little. The end of 2 weeks from now should see the value at 125 USD – 130 USD. By the end of 2019, the price should be at 30 % more than its current value. Dash Price Prediction is absolutely bullish with a target of 400 USD by end of 2020.

We advise the short term investors to get a buying position as the coin is likely to inflate further. It will give a handsome dividend in just two weeks’ time. The long term and medium-term outlook are also bullish.